This fixture will include two of the top teams in League Two, at least until this point of the season – Sutton and Swindon. It is curious that the teams have never played against each other although both have spent their last few years at the lower leagues of England.

The curious case here is that Sutton was promoted from the National League last season while Swindon was relegated from League One. Yet, both teams are performing more than well and this first head-to-head promises to be thrilling.

Sutton has not yet had a draw in a home game this season but this time, they will be meeting one of the strongest away teams and we do not expect them to win effortlessly as usual. After all, on the other side, we have Swindon who has 4 wins and 2 draws away from home. Both teams have been spectacular to date and we expect to see a goal-packed draw – perhaps 2:2.

Top Betting Odds and Stats for Sutton vs Swindon

FAQs regarding Sutton vs Swindon 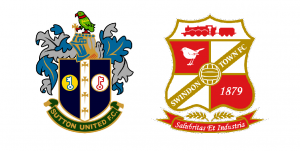 • What is the average number of goals per match for both teams this season?

Sutton and Swindon have been scoring and conceding a lot in the opening rounds of the season. Sutton's average goals per match are 2.5 while Swindon's – 2.2.

The match will be played at Sutton's stadium in London – the Gander Green Lane which can hold 5,032 visitors.

• When was Sutton United founded?

• When was Swindon Town founded?

Swindon Town was founded much earlier than Sutton United – in 1879.