Suwon Bluewings is set to host Gangwon FC on Saturday 27th August for a K-League 1 clash. This will be the fourth encounter between the two teams in 2022. Two of the three previous duels ended draw while Suwon won the other in an FC Cup fixture. Read further for more details in our preview.

Suwon has three wins, one draw and one loss from their last five matches while Gangwon bagged two wins and three losses in the last five games. Our tipsters at Football Ground Guide have settled on the following free predictions for the K-League clash:

With only one loss in the last five, Suwon Bluewings also boast a better form than Gangwon FC ahead of this clash. The hosts lost just once in their last five games while Gangwon suffered three defeats in as many games. Moreover, Suwon has dominated this matchup with 10 wins and 6 draws and lost only 4 times to Gangwon in previous 20 duels.

Our last tip for Suwon Bluewings vs Gangwon FC is over 2.5 goals. Half of the last six meetings had more than two goals. Most importantly, four of the last five matches on both sides had 3 or more goals.

Suwon Bluewings are only 3 points behind Gangwon. The ranking on the table that puts the hosts at position 9 while the visitors are 9th sets the stage for a grueling K-League meeting this weekend. The hosts have enjoyed a relatively good performance and hope to build on their back to back wins with home support in this clash.

Gangwon is under pressure to widen the lead over Suwon Bluewings to six points. However, a shaky run that has seen the visitors post a mixture of losses and wins is a big worry before they make this trip. The visitors have failed to get two wins in a row in their last five games. And while this trip could be their chance to do so, it worth noting the visitors have now lost two away games in a row with a similar defeat scoreline of 2-1.

For the latest team stats, H2H information and the best betting odds for the K-League 1 match, check the tables featured below. 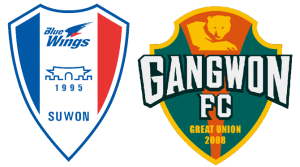 Where will this K-League 1 match take place?

Suwon Bluewings are the hosts at the Suwon World Cup Stadium in South Korea.

What time will the fixture begin?

Suwon Bluewings vs Gangwon will begin at 12:00 GMT+3

What was the score in the last encounter?

The last meeting was at home to Gangwon FC and it ended 1-1.