The Suwon Derby is back in action with the two rivals going up against each other at the Suwon World Cup stadium this weekend. The two teams cannot be more closely matched, as they are separated by just one point coming into the match.

Suwon Bluewings saw their poor form extend even further with a 3-1 loss against Ulsan Hyundai. Meanwhile, Suwon picked up a 1-0 victory over Jeju United thanks to a second-half penalty from Veldwijk.

The recent form of Suwon Bluewings has not been good with many losses against teams in the upper and lower half of the table. The confidence is certainly not present within the home team but a derby match should wake them up. Suwon are comparatively mediocre on the road and they have not won away from home for almost a month.

The derby matches between Suwon and Suwon Bluewings have produced a mixture of high and low scoring matches. The poor form experienced by the home team is likely to put things on a cautious note that may lower the entertainment quotient from this match.

This derby is once again expected to be a close match with very little going on between the two teams. The most recent encounter back in July went in favour of Suwon thanks to a red card changing the match in the latter stages. In the absence of such an event, this game might end up as a closed draw. There have been just three occasions when one of these two teams have been unable to score.

Suwon are looking forward to the prospect of remaining ahead of their rivals. There is a significant possibility given that Suwon have been able to experience a much greater momentum in recent weeks. Apart from the loss against Pohang Steelers, Suwon have largely been good enough to get a decent set of results.

Top Betting Odds and Stats for Suwon Bluewings vs Suwon

FAQs regarding Suwon Bluewings vs Suwon 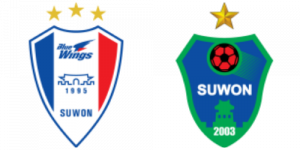 The game will be held at the Suwon World Cup Stadium.

The team regarded as a strong favourite to win this match would be Suwon Bluewings.