Suwon will face Seoul in another match from the 21st round in the Korean K1 League on Sunday.

These two teams have had similar season overall and are close to each other. Both will have their chances and here are our predictions.

As mentioned above, we think that these teams are on about the same level right now and have equal chances in this fixture. The two sides played once this season already and the match was won by Seoul with a surprising 3:1. In this new fixture, we once again expect to see goals from both sides but perhaps a more competitive and leveled performance. Suwon's current form is incredible, so we should see a goal from them again.

Seoul are the favorites in terms of odds and it is expected but we think that they will not win this match. Their form is not bad and they already beat Suwon once this season and have generally been beating them for years now. However, Suwon are in their best form of the entire season and we think that they will have a chance to at least get a draw. Suwon have not lost in five games in a row and even won four of those last five fixtures.

When it comes to corners, the majority of the league has similar stats. All teams in the league have averages above 7 corners per game. It is expected that this is the league's minimum but it sometimes does not happen. In Seoul's case however, they are the team that takes the most corners out of the entire league individually and we expect this line to be covered with ease. The first match between them had 10 corners, 9 of which for Seoul.

Suwon FC were one of the best teams last year and finished the season in 5th place, just 4 below the AFC Champions League at 3rd place. This season has been similar for them to date but slightly worst – a lot of other teams stepped up and showed that they too want to fight for the top positions. In the new season, after 20 rounds, Suwon have a negative goal difference – 27:29.

Seoul were weaker than Suwon in the previous campaign as well but their stats have actually been quite different. They have less wins but also less defeats and no negative goal difference. The team has potential but their attack needs to improve in order to achieve something more significant. After 20 rounds, Seoul have 22:22 when it comes to goals.

Top Betting Odds and Stats for Suwon vs Seoul

FAQs regarding Suwon vs Seoul 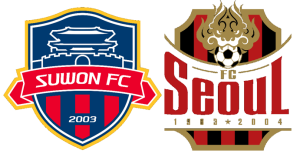 The Korean elite league is a small competition and most teams are close to each other. Right now, Suwon are 6th with 25 points while Seoul are 8th with 23 points.

This fixture has been scheduled for Suwon's home ground – Suwon Sports Complex.