Swindon host Barrow in their most important fixture of the season on Saturday.

Swindon are still fighting for that last spot in the playoffs and if they fail to win here, it will be over for the team.

The first match between these two teams ended with a surprising 2:0 win for Barrow. In this fixture, we expect the opposite result and a lot more goals. Barrow have been one of the weakest teams in the league this season but their latest performances showed their true potential and they have been scoring goals. Swindon are not in the perfect shape but are the highest-scoring team in the league next to Forest Green.

Barrow have already saved themselves from relegation and this fixture has no meaning to them. Swindon, on the other hand, are in desperate need of points and this win is mandatory. They are coming after two consecutive wins, including one against the leaders Forest Green. The hosts should be pretty motivated to win a third in a row and against a convenient opponent.

Barrow might have been one of the weakest teams this season but they improved a lot offensively and they have been taking a lot of corners too. For instance, the visitors took 6.20 corners on average in their last five away games in the league. On the other side, Swindon took just 3.80 corners per game in their last five home games but we expect more action in this match.

Swindon started the season as one of the strongest teams but then, they fell out of shape and fell behind from the promotion zone. They have been fighting to get back up there for months and they have only two chances to succeed. They need to win both remaining games and hope that their opponents fail in their last two fixtures.

Until about a month or two ago, Barrow had not impressed anyone with their performances this season. Not that they have improved too much but they managed to win matches against Sutton and Forest Green, which is an achievement by itself. These wins helped them secure their place in the league and they are safely above the relegation zone with two games left.

Top Betting Odds and Stats for Swindon vs Barrow

FAQs regarding Swindon vs Barrow 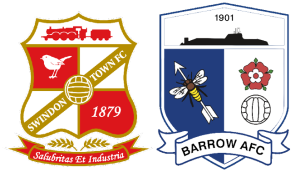 In which places are Swindon and Barrow?

This fixture has been scheduled for Swindon's home ground – County Ground.