Swindon and Bristol Rovers go head-to-head for the three points in League Two on Saturday. Can the Robins complete the double over an inconsistent Rovers outfit? Read our free predictions and find the latest odds for the fixture below in our detailed match preview.

Swindon are unbeaten in four games at The County Ground ahead of their clash with Bristol Rovers on Saturday. Read our top three predictions for this weekend’s fixture below.

Swindon boosted their promotion hopes with a 3-1 victory over playoff rivals Port Vale on Saturday and with their confidence galvanised, the Robins should be able to claim maximum points against a temperamental Bristol Rovers outfit. The Pirates have won just twice in ten attempts on the road this season and they were convincingly outplayed by Swindon (3-1) when the teams last met in October.

Rovers have struggled to collect many points on their travels this term, though they have at least been reliable goal-scorers. Joey Barton’s troops have notched in all but two of their ten League Two away assignments since August and they are capable of hitting a consolation effort at Swindon. Five of the Robins’ last six home matches in the fourth tier have produced goals at both ends and we expect that pattern to continue this weekend.

There are few players in better individual form in the EFL than Swindon’s Harry McKirdy at present. The 24-year-old has hit the net six times in his last four appearances and McKirdy rattled in an incredible four goals in Swindon’s last home league game against a strong Northampton (5-2) side on January 1. McKirdy is in ruthless form and we recommend backing him to make his mark again on Saturday.

Swindon moved up to fourth spot and to within one place of the automatic promotion spots with a fine 3-1 triumph at Port Vale on Saturday. The Robins dismantled the team above them, Northampton, 5-2 in their last runout at The County Ground earlier this month and Ben Garner’s side are playing with truckloads of confidence at present.

Bristol Rovers have climbed up to 16th position thanks to back-to-back victories over Rochdale and Hartlepool, though that was only the second time this season that the Pirates recorded successive wins in League Two. It’s worth noting that both wins were secured at The Memorial Stadium however, and only four clubs have won fewer away games than Rovers overall this term.

Top Betting Odds and Stats for Swindon vs Bristol Rovers 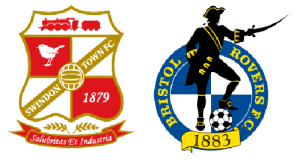 Swindon vs Bristol Rovers is not being shown live on TV in the UK.