The County Ground prepares to host Swindon’s first League Two home game of the season and they go up against Carlisle United this weekend. The two teams had contrasting fortunes in the first game week.

Swindon began the new campaign a 3-1 win over Scunthorpe United. Swindon went out of the League Cup at the hands of a penalty shootout loss against Cambridge. Meanwhile, Carlisle were unable to find that decisive goal that led to a goalless draw against Colchester United, while they went on to be knocked out of the League Cup by Sheffield United.

Swindon to win or draw

Swindon have been expected to be one of the teams at the bottom end of the table. However, the performance in the opening game against Scunthorpe United helped build some confidence for the team, which has gone through numerous off-field issues. Carlisle struggled to find the back of the net despite creating many opportunities in the games against Colchester and Sheffield United.

Even though Carlisle have been unable to score in any of the competitive matches so far this season, they have been creating a lot of chances and it is bound to go in at one time or the other. Swindon came up with a three-goal haul against Scunthorpe to enhance their confidence levels.

Swindon have been able to get goals from three different players in the opening round of the season. Carlisle are yet to open the scoring, but the number of chances that they keep creating in matches and gives confidence to expect goals for the visitors.

Swindon had to go through a minefield of problems during the off-season. As expected, the squad looks depleted in several areas of the pitch. However, the opening day win over Scunthorpe gives a lot of confidence for the team. Ben Gladwin is the big injury problems for coach Ben Garner.

Chris Beech is aware that the Carlisle team is certainly weaker than before and there are very few positives for the team which appears to be badly in need of confidence after a mediocre start to the season. The big hope will be on Zach Clough, who can inject some creativity into the squad. There are no injury problems for Carlisle in this match.

Best Numbers Ahead of League Two Match – Swindon vs Carlisle 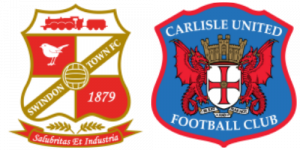 The match between Swindon and Carlisle will take place at the County Ground.

The team seen as a favourite for three points would be Carlisle.