Swindon welcome Harrogate Town to the County Ground for a league match that could potentially see them go into the second spot. Harrogate, meanwhile, are looking to sustain their place in the play-offs. This will be the first meeting between the two clubs.

Swindon were able to register a 3-1 win over Hartlepool United to continue their excellent set of results since October. Harrogate Town made it back-to-back away victories in the league after beating a poor Carlisle United team 2-0 during the weekend.

Swindon registered a fifth consecutive victory in all competitions after a comfortable success over Hartlepool. The team has been doing exceptionally well in different areas of the pitch and that they are strong favourites to get three points. Hartlepool have also been in good form with two wins in the last three, but the quality of opposition faced by Swindon has been much better. Armed with home advantage, Swindon are a good pick to get three points in this match.

The goals have been flowing for Swindon with over 2.5 goals in four out of the last five matches for Ben Garner’s men. This should come as a huge surprise for a team who have one of the meanest defences in the league 17 goals conceded. Harrogate are the joint top scorers in the league with 32 goals from just 18 matches. A game involving Harrogate should see a lot of goals.

Jack Payne has been in excellent form over the last few games. His injury time goal against Hartlepool means that he has now scored seven goals in 17 matches this season. This includes goals in back-to-back games. Payne has also been able to manage a goal in his last two games at the County Ground.

Swindon have been keeping tabs with top spot for a while with their impressive form. A sequence of five consecutive victories in all competitions has put Swindon level on points with Exeter City and just five points behind Forest Green. After having started the season as favourites for getting back to League One, Swindon have certainly been living up to the expectations.

Harrogate were able to avoid falling out of the play-off places despite an inconsistent set of results over the last few weeks. However, the team continues to benefit from an attack that has been scoring for fun. Luke Armstrong remains as one of the top names in the scoring charts this season with nine goals.

Top Betting Odds and Stats for Swindon vs Harrogate

FAQs on Swindon vs Harrogate game 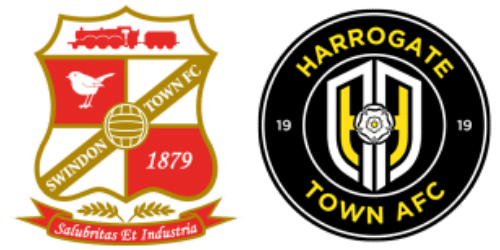 The County ground in Swindon will be the destination for this Championship match.

Swindon are the strong favourites for success in this match owing to their impeccable form in recent weeks.