Swindon will host Leyton Orient in one of the crucial fixtures of this upcoming round on Monday.

Swindon remain a contender for promotion but they need all the points they can get until the end of the season to even get back in the promotion zone.

Leyton Orient are one of the teams that have had the fewest games with over 2.5 goals this season and there are several reasons why. Even in their worst periods, they did not concede a lot of goals and even when they win, it is with 1:0 or 2:0. On the other side, however, Swindon are one of the teams with the most overs – 25/41 games. Also, the last four h2h games between these two teams ended with more than 2.5 goals.

Surprisingly, the first game between these two teams this season ended in a 4:1 win for Leyton Orient. We think that this match will have the completely opposite result. Leyton Orient have improved a lot but most of their good results are not against top teams. Swindon are in desperate need of points, so we think that they will go all in and win this match.

Swindon would have been a lot better if they made some improvements with transfers over the winter window but they didn't, and their performances continued to plunge downwards. Now, the team is in a difficult position but with one additional game to play, so their chances for promotion exist and with some luck and a series of wins, it will happen.

Leyton Orient have had a shocking season with multiple turning points. They started as an above-average side and then went on to become the absolute weakest side with sixteen consecutive games without a win, most of which – defeats. Then they suddenly improved out of the blue and started winning game after game without allowing any goals. Overall, you never know with Leyton Orient but the season for them is over, so we shouldn't expect them to be at their best anymore.

Top Betting Odds and Stats for Swindon vs Leyton Orient

FAQs regarding Swindon vs Leyton Orient 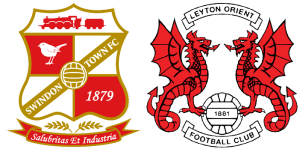 In which places are Swindon and Leyton Orient?

Leyton Orient have nothing to fight for anymore while Swindon need all the points they can get to get back to the top before the end of this season. Right now, the hosts are 10th with 65 points while Leyton Orient are 14th with 52 points.

This match will take place at Swindon's home ground – a stadium called the County Ground.