Swindon will face Newport in a crucial match from the 41st round of League Two on Saturday.

Swindon and Newport are next to each other exactly below the promotion zone and this match is key for both teams and their chances to reach the playoffs.

Swindon and Newport have almost identical stats this season when it comes to goals. Swindon's goal difference is 62:48 while Newport's goal difference is 62:50. These are two of the three highest-scoring teams in the league and we will be shocked not to see each one of them score in such a massive fixture against each other. The first game between them ended in a 1:2 win for Swindon and we expect to see at least 1:1 here and possibly over 2.5.

We have two completely identical teams in terms of strength and abilities but they have had different performances this season. Newport are one of the best away teams in the league so we expect a lot from them here. On the other side, Swindon were actually one of the weakest hosts in the league until recently. It is true that they recently won a lot of home games but we think that Newport will be a difficult challenge and we expect a draw.

Swindon and Newport even have similar corner stats this season and we expect to see a good number in this fixture. For example, Swindon's all-season stats are 5.08 corners in their games throughout the year. On the other side, Newport took an average of 4.88 corners in all of their games this season.

Swindon composed an incredible squad made up from players from Championship and League One and we expected a lot from them this season. It is not that they have been disappointing but they have one of the stronger teams in terms of individual players. They have a few rounds left to return to the playoff zone but a match against Newport will be a serious challenge.

Newport had one of the biggest improvements after the terrible start this season and deservedly are among the best 10 teams. They did not have any transfers over the winter window but they also made a solid squad last summer. The race for promotion is fierce this season and Newport have a lot more work to do and they should look for at least a point against Swindon's incredible team.

Top Betting Odds and Stats for Swindon vs Newport

FAQs regarding Swindon vs Newport 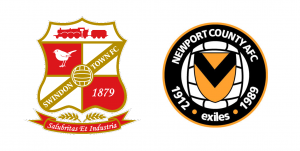 In which places are Swindon and Newport?

These two teams are next to each other in the table and have identical stats. Right now, Newport are above Swindon at 8th place with 63 points while the visitors are 9th with 62 points.