Swindon and Salford are two of the most interesting teams in League Two at the moment because both have been in great form and have moved up quite a few places in the standings.

Swindon got back to the promotion zone after three consecutive wins and will be motivated for a good result against Salford, who showed some serious improvement as well.

What should we expect from two completely different teams in a head-to-head game? Swindon are one of the teams that has had the most games with over 2.5 goals while Salford's season has seen quite the opposite results. Salford are far from the strongest teams but their defense has been quite impressive throughout the season and in recent games, in particular. Four of their last five games had less than 5 goals and they actually conceded a goal in just two of them. On the other side, five out of the last five games for Swindon had a bunch of goals and more than 2.5 but we expect the opposite here. The previous game between these two teams ended in a 0:1 win for Swindon and we expect a low-scoring game here too.

Both sides have been winning a lot of games lately but we think that Swindon are the much stronger side and have better chances to win this game. The team has been absolutely dominant in recent weeks and they did not concede a goal in any of their last three games. At the same time, they scored a total of 11 goals in those three games. Of course, these matches were against three of the weakest teams in the league and Salford no longer qualifies as such, so we might see a worse performance from the hosts and even a draw. With this said, we prefer to go for the draw no bet option instead of the clean result.

We expect to see some corners in this match as both teams are in perfect forms and will be playing attacking football. Swindon have taken an average of 5.28 corners this season per game while Salford have taken less – 4.68 corners per game. Nevertheless, we think that we will see at least 6-7 from Swindon alone as the team has been quite impressive at home this season and they are one of the strongest hosts in the league. Salford's recent form also suggests that we can expect a lot from this team in attack.

Top Betting Odds and Stats for Swindon vs Salford

FAQs regarding Swindon vs Salford 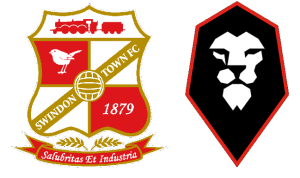 • In which places are Swindon and Salford?

Swindon are back in the play-off zone and are currently sitting at 5th place with 52 points. With two more wins, the team could climb up to 2nd place with ease. Salford have also come a lot closer to the promotion zone and are now 11th with 44 points.

This match will take place at Swindon's home ground – County Ground, which has a capacity for 15,728 spectators.