Perugia will visit Ternana in the 37th round of Serie B football on Saturday.

The season is over for Ternana but Perugia still have a chance to get back to the playoffs at the end of the season.

We have two completely different teams here. Ternana are the side that has had the most goals in their games this season out of the entire league while Perugia are the team that has had the fewest. Nevertheless, both sides are in incredible forms and have been scoring a lot of goals in their games, so even with the current circumstances, we expect a goal-packed game or at least a 1:1 at FT.

Normally, we would go for the away win here given that they are in desperate need of the three points. Nevertheless, Ternana's current form is extraordinary. In their last few games, they beat Frosinone, Benevento and Cittadella. Overall, they scored 11 goals in their last 5 games. On the other side, Perugia have also been incredible and have not lost in five games in a row. Three of those were draws, however, and we expect to see the same result here.

Until about a couple of months ago, Ternana were your typical average Serie B team with zero chances of any achievments. At one point, however, they improved a lot and if this had happened one month earlier, they would have been a serious contender right now. Their attack is outstanding but their defense is one of the weakest in the league, which is what prevented them from being a top contender.

We expected a lot more from Perugia and they were looking like a team that will certainly get to the playoffs. Their current form is as good as ever but some earlier chaptes in this season had them lose a lot of games that had an impact. Perugia are the team that has the most draws out of the entire league this season, which is another one of the main problems.

Top Betting Odds and Stats for Ternana vs Perugia

FAQs regarding Ternana vs Perugia 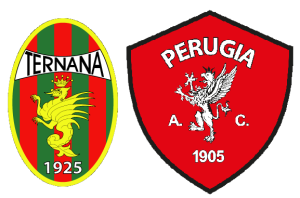 In which places are Perugia and Ternana?

This match has been scheduled for Ternana's home ground – Stadio Libero Liberati.