Teuta Durres and Shamrock face off for a place in the Playoff Round of the Europa Conference League in Albania. Read our free predictions and find the top odds for the clash below in our expert match preview.

Shamrock Rovers put their narrow one-goal lead on the line when they travel to take on Teuta Durres in Albania. Read our top three predictions for Thursday’s contest below.

Shamrock Rovers needed a dramatic injury-time effort from 17-year-old Aidomo Emakhu to beat Teuta Durres last week, though the Hoops’ victory was thoroughly deserved following a dominant performance against the Albanians. Rovers racked up 13 attempts to Teuta Durres to one in the first-leg in Dublin and we’re tipping the Irish champions to show their class again in the return fixture on Thursday.

Shamrock Rovers were superb defensively in last week’s first-leg, limiting their opponents to just a single effort on goal over the course of the game. The Hoops’ exemplary work in their own third has wrangled them three clean sheets in their last four matches, and their defensive strength means they are also profitable performers in the under 2.5 goals market. 75% of their last four matches produced two or fewer goals and that pattern should continue in Albania.

While Shamrock Rovers have been defensively resolute in recent weeks, they have taken some time to get going further up the pitch. They recorded victories in each of their last three fixtures, though it’s worth noting that all three contests were level at the break before Rovers made their breakthrough in the second period. Thursday’s clash in Albania could develop along similar lines and the half time draw market is worth considering as a result.

Teuta Durres’ domestic campaign doesn’t start until the end of August and their continental endeavours ahead of the new Albanian season have returned little in the way of positive results. The Sea Boys have lost four of their five games in the Champions League and Europa Conference League qualifiers and they look short of the standard required to compete.

With seven wins in their last eight matches in all competitions, Shamrock Rovers have hit a rich of form and the Hoops top the table in the Irish Premier Division ahead of their crucial second-leg clash with Teuta Durres this week. Just one of Rovers’ last six games were played on the road and Stephen Bradley’s men should be fresh, fit and firing as a result. 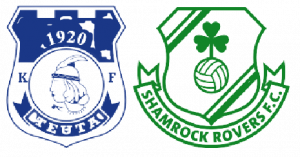 Thursday’s game will be played at the Elbasan Arena.

Shamrock Rovers carved out a narrow 1-0 victory over Teuta Durres when the teams last met on August 5.