Tranmere and Crawley meet at Prenton Park on Saturday to battle it out for three points in League Two. Read our predictions and find the latest odds for the fixture below in our detailed match preview.

Tranmere have won three out of four league games at home ahead of their clash with Crawley on Saturday. Read our top three predictions for this weekend’s fixture below.

Tranmere are still hovering in midtable, though their 0-0 draw at leaders Forest Green last weekend highlighted how competitive they can be and at Prenton Park, Rovers have enjoyed plenty of success so far. Tranmere have won three of their first four League Two tussles at home this term and we’re tipping them to record another victory on Merseyside against a Crawly team that were beaten in 75% of their first four away assignments of the campaign.

Remarkably, under 2.5 goals have been scored in 100% of Tranmere’s nine League Two fixtures this season and even more incredibly, Rovers simultaneously have the division’s worst goal-scoring and the best defensive record so far. In simple terms, their games have been woefully low on action, so stick to the under 2.5 line when they play Crawley on Saturday.

A bet on both teams not to score would have returned a winner in nine out of nine League Two matches involving Tranmere since the summer and we recommend another stake on the market on Saturday. Rovers have conceded just three goals in the division in 2021/22, while Crawley failed to notch in 50% of their first four League Two tussles on the road.

Top Betting Odds and Stats for Tranmere vs Crawley 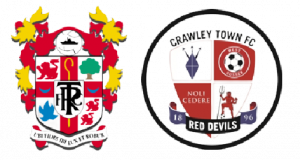 Tranmere and Crawley last met on March 6. Town won 1-0 against Rovers on that occasion.

We recommend using the odds at William Hill for Saturday’s contest.