Tranmere and Mansfield are the first two teams that will clash this weekend and this game proves to be extremely important. It will decide which team will continue as one of the main contenders for promotion and which one will have a more difficult task ahead.

Tranmere were once a top team in League Two. While they remain in the promotion zone at this point, the team is one of those in the worst current form and they have not won a match in weeks.

Even though Tranmere have not lost in a while at home, this bad current form displayed on the road will also have some impact on their home performances. With this said, we expect Mansfield to be the better team on the pitch and to start the match stronger – this is how they have been playing for a while now. Tranmere conceded first in four out of their last five games. On the other side, Mansfield were the first to score in eight out of their last 10 games and we think that it will happen again against Tranmere.

Top Betting Odds and Stats for Tranmere vs Mansfield

FAQs regarding Tranmere vs Mansfield 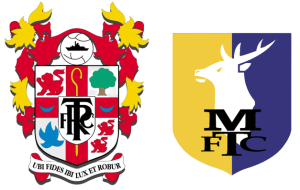 • In which places are Tranmere and Mansfield currently?

Both teams have almost identical stats at this moment although Tranmere have played three games more than Mansfield. Anyhow, both sides have 56 points right now and are sitting at 6th and 7th place. Even their goal difference is almost identical.