Tranmere look to extend their winning run in EFL Trophy when they host Oldham Athletic at Prenton Park for midweek action. The visitors will be eager to find the momentum that they are lacking recently.

Oldham are winless from the last four matches with alternating defeats and draws and got only one victory in the last eight matches. While Tranmere found their momentum back after three winless matches and have acquired five wins in the last eight games. The last H2H meeting has witnessed the Latics as a winner after penalty shootouts. But Tranmere has got the home advantage this time where they have registered five wins out of the last six home games. So the host will be of high potential to extend their stay in the competition.

The last two meetings between the teams have crossed the total of over 2.5 goals but most of the matches have followed a low-scoring outcome when these teams play against each other. Three of the last five H2Hs have under 2.5 goals. Adding more to this, Tranmere and Oldham have found the target only four and three times respectively in their last four matches. So this game is also likely to go with a low total.

Tranmere didn’t score for two matches consecutively before the last match but they have been quite good at scoring goals. Oldham has scored only once in the last three away games and didn’t score more than once in the previous four matches. We have seen two clean sheets in the last five H2Hs, one for each and Tranmere got their win in the away game. So we think that they can restrict their coming rivals again with the home advantage and manage the clean sheet.

Super White Army started the current season of EFL Trophy in style and managed to win two consecutive games of the group stage. But the team’s recent results have been quite mediocre with two defeats, two draws, and one win in the last five matches. Tranmere are eleventh on the League Two points table.

The Latics came into this game with a draw against Ipswich playing in the FA Cup. They won the opening game of the EFL Trophy group stage against Salford but lost the second meeting against Leeds U21 with unexpected performance, giving two own goals and one penalty. Oldham are one of the modest teams of League Two but have secured the second position in Group 2 of EFL Trophy with one match in hand.

Top Betting Odds and Stats for Tranmere vs Oldham

FAQs regarding Tranmere vs Oldham Coverage and Accessibility 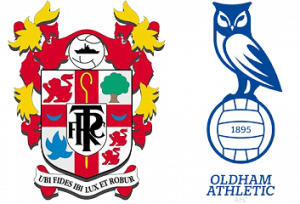 Tranmere trounced Oldham 3-2 after extra time in the EFL Cup.