The teams from the bottom of the table, UC Dublin and Finn Harps face each other in Premier Division on Friday, 12 August. But the teams have got the back of the last undefeated game.

UC Dublin has managed two wins in the last five games, together with two defeats and one draw. However, Finn Harps lost five games in a row before the last game. The Harps are also winless in the last eight away outings and lost six of them. Back to the H2Hs, the Students are unbeaten in the last five hosting H2Hs and won three of them. So we can predict a win for UC Dublin in front of the home fans.

UC Dublin has managed to score seven goals in the last five outings but the Harps have lagged in the away outings. Finn Harps rattled the net only four times in the previous five away attempts. Moreover, none of the last four H2Hs between these teams ended with over 2.5 goals. Given these stats, we see the same trend to be followed in this game.

Despite not having the momentum of winnings, UC Dublin has managed to score in four of the last five attempts. The Students also kept two clean sheets in the recent four outings. However, Finn Harps failed to score in two of the previous three away duels. In the H2Hs, the Harps were miserable and didn’t score a single goal in the last four H2Hs. So we expect only UC Dublin on the score sheet of this game.

The Students were able to restrict Drogheda United to a 1-1 draw in the last game, playing away from home. But UC Dublin has won only two games in the 25 league attempts and are buried at the last of the table. Colm Whelan will not be able to give his services in this game due to a cruciate ligament injury.

The Harps finally succeeded in terminating their losing streak in the last game and won by 3-0 against Drogheda United. The team has secured three wins and six draws in the 25 league outings and stands in ninth place in the standings, David Webster will be the only player to miss the game due to fitness concerns.

Top Betting Odds and Stats for UCD vs Finn Harps

FAQs regarding UCD vs Finn Harps Coverage and Accessibility 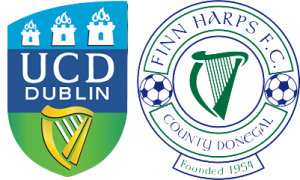 Where is the game being played? UCD Bowl (Dublin).
Who won the last Head to Head fixture? UCD won with a 0-1 scoreline.
When is the match scheduled? The match will take place on 12 August 2022 at 19:45 GMT.