Ulsan To Win 2nd Half

Ulsan Hyundai will face Bucheon FC 1995 in another match from the 1/4 finals of the Korean Cup on Wednesday.

The favorite in this match should be obvious but we have already seen that anything is possible in the Korean Cup.

Ulsan Hyundai have a very difficult schedule with multiple games per week and we expect this to be an under 2.5. The team played against the weakest side in the elite over the weekend and failed to win – a 0:0 draw. It could be that they are tired or just pure luck but Ulsan did not look great in this match. Bucheon are a significantly weaker team in each case, so we do not expect much from them either but Ulsan should win this with 1:0 or 2:0.

The odds for Ulsan to win have no value and it is normal – Ulsan have been the absolute best team in the league this season and the main contender for the championship in the country. We think that the 2nd Half win for Ulsan has some value because this is a team that performs the best in the late minutes of the games. This is a side that often fails to score in the first 45 minutes but then destroys opponents in the second halves.

Bucheon FC 1995 are not a bad team in each case but they are levels below Ulsan and most other elite teams. They are not a high-scoring side and we saw it in the multiple Cup games this season already. Ulsan, in turn, have a strong defense and it will be surprising to see them concede. We think that the hosts will do their best to win quick and easy.

Ulsan Hyundai failed to win the championship in the previous season in Korea but this year, they have been the absolute best team. They have been having issues lately and we might see them lose more points soon but we are certain that they will not neglect the cup tournament. Ulsan are the highest-scoring team in the domestic elite league and they also have the best defense there.

Bucheon are a team from the second league in Korea – the K2 league. After 21 rounds in the new season, they are one of the main contenders for promotion at the end of the campaign. Their stats, however, have been quite disappointing next to the majority of other good teams in the league. After 21 rounds, their goal difference is 23:18. The team did, however, go through the leaders in the K2 as well as Suwon from the elite on their way to the 1/4 finals of the cup.

Top Betting Odds and Stats for Ulsan vs Bucheon 1995

FAQs regarding Ulsan vs Bucheon 1995 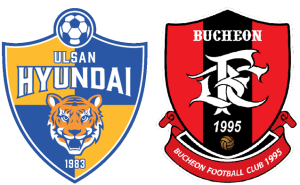 In which places are these two teams in their respective leagues?

Both sides are among the best in their divisions. Bucheon FC 1995 are currently 3rd in the league while Ulsan remain at the top of the elite division.

This fixture has been scheduled for Ulsan's home ground – the Ulsan Munsu Football Stadium.