Ulsan Hyundai are facing Guangzhou in another match from the AFC Champions League on Thursday.

Honestly – what is happening to Guangzhou? They were doing so well in their own league but in the champions league, they have the worst record out of all teams.

There is something absolutely wrong with Guangzhou and all teams against them score extreme numbers of goals. This ‘something' is the fact that the side picked a team of youngsters instead of their strong traditional squad for these games and obviously, they didn't stand a chance. This will happen again in the third match for sure and we expect three goals from the hosts alone.

The full time match result odds will not exist once again, so we are moving on to the total goals for a single team. Ulsan did not start their Champions League campaign in a good way but they are an incredibly powerful host and we saw it in their domestic league games. Against a team of youngsters, they will finally get the win in the AFC CL and it should be with a lot of goals.

Ulsan Hyundai might not have the best defense at all but they will be playing against a team that had a couple of goal attempts in two games. We expect nothing from the visitors and Ulsan Hyundai should be able to keep their net clean for the first time in the championship this year.

Ulsan Hyundai had an incredible start to the season in the K League 1 in Korea and are the only team that has not yet lost a match. They made solid transfers and their team is full of young talents. The problem is that they fell in the most difficult AFC group and they had problems in the first two games until now. The two fixtures against Guangzhou are the perfect chance for six easy points.

Guangzhou ended in 3rd place last season and they were one of the strongest in the league as they have been absolutely every year. Then, they made the decision to call out only young players for the AFC Champions League bouts – an absolutely weird decision and it has already backfired in the most possible way. In the first two games, they conceded 13 goals without scoring a single one. There is a good chance that it will happen again in this one.

Top Betting Odds and Stats for Ulsan vs Guangzhou

FAQs regarding Ulsan vs Guangzhou 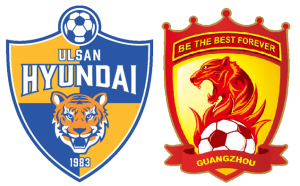 In which places are Ulsan and Guangzhou in their domestic leagues?

The league in China is yet to begin, so Guangzhou had not played games in a while. Ulsan Hyundai, on the other hand, are the top team in Korea and are in 1st place after 9 rounds with 7 wins and 2 draws.