New boys Union Saint-Gilloise take on champions Club Brugge in their first home game of the new Belgian First Division A campaign. Read our predictions and find the best odds for the game below in our expert match preview.

Union Saint-Gilloise arrived in the big time with a bang last week against Anderlecht. Can the newly-promoted outfit upset the odds again when champions Club Brugge visit? Read our top three expert predictions for Sunday’s fixture below.

Union Saint-Gilloise exploded onto the First Division A scene last week with their shock 3-1 victory at Anderlecht, though their surprise win should sharpen focus in the Club Brugge ranks ahead of their visit to the Stade Joseph Mariën. The champions were frustrated on the opening day of the campaign by Eupen, though they created more than enough clear chances to suggest they are ready to push for the first victory of their title defence on Sunday.

Union Saint-Gilloise will have their tails up following their rip-roaring win at Anderlecht and we expect them to find the net again having built up their confidence in attack. Club Brugge rarely fail to score themselves however and FCB’s record of scoring in 20 of their last 23 league games in Belgium indicates that bettors should expect them to register too. With those factors absorbed, the BTTS market is worth backing this week.

Union Saint-Gilloise really went for the jugular at Anderlecht last week and the contest developed into a gripping encounter as result. That same attacking mentality should produce over 2.5 goals for the second time in as many games on Sunday, especially when you consider that Club Brugge both scored and conceded twice against Eupen last week.

It’s been a fairy tale few months for Union Saint-Gilloise following their return to the First Division A for the first time since the 1970s and their epic upturn under popular boss Felice Mazzù continued with superb 3-1 win at Anderlecht last week. Les Unionistes have been Belgian champions 11 times in their history, though their last title was won all the way back in 1935.

Champions Club Brugge are the clear favourites to reclaim their crown in 2021/22, though their title defence got off to a limp start when they drew 2-2 with Eupen last week. FCB came up against an inspired keeper in Eupen's Abdul Manaf Nurudeen and they will also need to be much sharper in front of goal to claim maximum points against Union Saint-Gilloise. 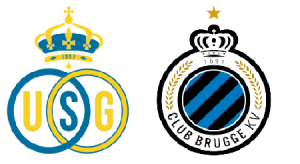 Sunday’s game will be played at the Stade Joseph Mariën.

Champions Club Brugge have been priced as favourites to win on Sunday.