Urawa Reds will host Kashima Antlers in another curious fixture from the 14th round in the J League.

Kashima Antlers have been a true contender up to this point in the season and they need to continue with the good performances if they want to keep that position.

Kashima Antlers have been having some pretty impressive games lately and the number of goals they have been scoring is impressive. Like, all five of their last five games in the J League and Japanese Cup ended with at least three goals. Moreover, the team scored 3 goals in four of these five games alone. With Urawa's good form right now, we expect to see goals from both sides and yet another over 2.5.

Both teams are in good form right now and will give us an interesting and competitive match. The curious fact is that Urawa Reds are on a streak of five consecutive draws in their matches in the domestic league. Overall, they lost a single match in their last 10 games in all tournaments. On the other side, Kashima Antlers lost only 2 games in their last 10 games and won 7/10.

Urawa were one of the better teams in the previous season and although they finished at 6th place, they won the Japanese Cup which sent them to the AFC Champions League. They played a good group stage last month but have been having a lot of issues in the domestic league and just 2 wins out of 13 games to date. Surprisingly, their goal difference is positive – 14:13.

Kashima Antlers played an incredible season last year but failed to qualify for the AFC Champions League. They finished at 4th place and had some impressive stats – 62:36 as goal difference. This season, they have been much better and their stats have been extraordinary – 9 wins in the first 13 rounds and a goal difference of 21:13. Until recently, they were at the top of the league. 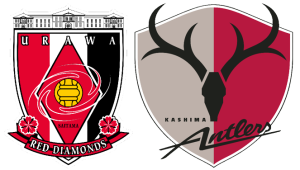 In which places are Urawa Reds and Kashima Antlers?

Surprisingly, Urawa Reds are near the bottom of the table – right now, at 15th place with 13 points. On the other end, Kashima Antlers are currently 2nd in the league with 28 points.

This fixture has been scheduled for Urawa Reds' home ground – the Saitama Stadium.