Urawa Red Diamonds will face Kyoto in the final match of the new round in the Japanese J1 League this Wednesday.

These two teams have had different results but are right next to each other in the table. Anything can be expected from this match and here are our predictions.

When it comes to goals, these are two of the three teams with the fewest overall since the start of the season. Both sides here have had just 5 games with over 2.5 goals this season out of 19 rounds that passed already. Between them, Urawa Reds and Kyoto rarely have goals – the two times they played over the past 12 months had just a single goal in both games. We do not expect much from this match in any regard.

Urawa Reds have had serious disappointments this season. Out of 19 games in the league to date, they had 10 draws already. The team has serious problems winning their matches although they have huge potential. Kyoto are one of the teams in the worst form right now with 3 defeats in the last five league games. The team lost seven out of the last 10 outings in all tournaments and in most cases, we didn't even see them score. They beat Urawa with 1:0 earlier, so we expect the hosts to take their revenge.

Urawa were one of the strongest teams last season and finished at 6th place in the league. The biggest achievement last season was that the team won the Japanese cup, which sent them straight to the AFC Champions League even without finishing in top 3. The team has extreme potential but that huge number of draws has put them behind the leaders and it is already late. They have the tied-best defense in the league and as long as they improve the attack, we should see them higher.

Kyoto returned to the elite after spending some time in the lower tiers of Japanese football and have generally been surprisingly good this year. Of course, they are not a contender for anything but as long as they get back to the better form, we should see them remain in the middle of the table and not face another relegation. 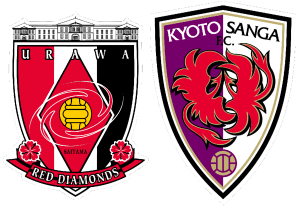 In which places are Kyoto and Urawa Reds right now?

As mentioned above, the teams have had different results but sit next to each other in the table – Kyoto are 9th with 23 points while Urawa are 11th with 22 points.

This fixture has been scheduled for Urawa's home ground – the Saitama Stadium.