In this betting preview, we look at the international friendly fixture between USA and Costa Rica. The USA are not the sexiest name in world football but they're definitely on the up. Costa Rica will have their work cut out to stop them.

USA might not be the most synonymous nation with football but their ‘soccer' side isn't half threatening to turn into something more than half decent. In their last three they've recorded a win, a loss and a draw but don't be fooled, they'll be too good for Costa Rica. Their longer term form – over 15 games – reads as two losses, three draws and 10 wins. Costa Rica meanwhile have managed just one win in the same period. If you still need convincing then USA have won the last two matches between the teams.

Prediction number one here touches on the good form USA have shown of late. They've scored plenty of goals but they've not given much away either. In their last 10 they have kept five clean sheets. Given that Costa Rica have failed to score in six of their prior 10 then it's hard to see both teams amongst the goals here; the fact that nine of the last 10 meetings between the two nations, which only takes you back to 2013, is hardly likely to turn you off this bet either.

Okay, so we've already spoken about the fact that USA haven't found scoring goals too difficult and that is true, however, we don't see them obliterating Costa Rica on Thursday. Only three of their last 10 matches have been under 2.5 goals but Costa Rica's form has seen eight of 10 end with less than three goals in. Once again, the head to head record between USA and Costa Rica feed this prediction too with seven of 10 coming in under 2.5

USA are building a seriously impressive squad and will fancy their chances of doing something over the next few years given the age of those players. Their form coming into this match is decent with defeat rarely tasted and, providing they're focussed, they'll expect to win again. Given they've got a squad with players like Christian Pulisic, Gio Reyna and Weston McKennie, who all scored in their 3-2 AET win over Mexico last time out, in it that perhaps shouldn't be too much of a shock.

Costa Rica offer somewhat contrasting form to the USA having struggled to get results of late but they're not very often completely outclassed with none of their last 10 ending with a margin greater than the solitary goal. If they're to get a result in this game they'll need to be on top of their game with Leonel Moreira likely to be a busy man in goal. In front of him, the main man is Chicago Fire captain Francisco Calvo. He too can expect a tough experience.

All the betting info you'll need for USA vs Costa Rica 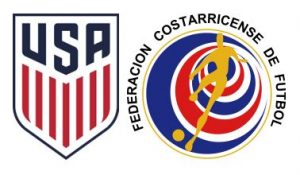 Who won the last meeting between the sides?

USA are the bookmakers favourite