This preview looks into Torino’s attempts to get clear of the drop zone when they take on Hellas Verona at the Stadio Marc’Antonio Bentegodi this weekend.

Torino have been able to open up a three-point lead over the bottom three with a game in hand. However, this match against Verona will be able to reveal whether this lead is sufficient or not. The top predictions for this game are:

Hellas Verona were finally able to halt a sequence of four successive defeats in the league with a home draw against Spezia. Torino took a massive step towards securing safety with the win over Parma. Davide Nicola’s team have been able to demonstrate a decent strength even in away matches. However, Verona and Torino have been able to play out a large number of draws – five in the last six.

Despite possessing one of the top centre forwards like Andrea Belotti, Torino have been low on goals this season. The team has generated only eight goals in the last six matches, while Verona have fared worse with just five goals during the same period. This is a match between two teams who have struggled to create/score goals with ease.

This has been a very competitive encounter for a long time. Both teams have ended up scoring at least a goal each of the last five encounters. Despite achieving safety, Verona are in need of three points to boost their fragile confidence. They will be pushing forward to the advantage of Torino on the counter-attack. This match should see goals at both ends.

Verona came up with a much-improved display in the recent draw with Spezia, although the game could only produce a point for the team which has little motivation to aim for wins in the remaining four games. Verona do have a great opportunity to make some places in the league table with the majority of their remaining matches against teams struggling in the table. Ronaldo Vieira, Miguel Veloso, and Eddie Salcedo are unavailable due to injuries, while Adrien Tameze is suspended.

The recent form of Torino has improved substantially compared to the last few months. The three wins picked up in the last five games have helped Inzaghi’s men open up a three-point lead for the bottom three. However, the club are still far from safety and they will be keen on making the most of matches against three of the remaining five opponents – Verona, Spezia, and Benevento. Nicola Murru and Vanja Milinković-Savić are injured for the team.

Top Betting Odds and Stats for Verona vs Torino

FAQs regarding Verona vs Torino Coverage and Accessibility 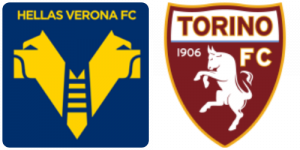 The Stadio Marc’Antonio Bentegodi will be the place where this match takes place.

The bookmakers have placed Torino as the favourites to win the match at odds of 27/20.