The third game from Serie B that will be played on Wednesday is between two teams in the fight for survival – Vicenza and Crotone.

Vicenza and Crotone have six more matches to find their way to safety or more precisely – to the play-in games above the places for direct relegation.

Vicenza and Crotone have almost identical stats at this point. Both sides have two of the worst attacks in the league and at the same time, two of the weakest defenses in the league. Even with such weak defensive capabilities, we think that there will not be many goals. The previous match this season ended with one goal and all five of the most recent h2hs ended with less than 2.5 goals.

Both teams have been equally as bad this season but we think that Vicenza are slightly better at the moment and have a better chance to win this match. Overall, Crotone have not won a single match on the road this season and they actually have 13 defeats out of 16 games. Vicenza's recent home performances surprised us a lot as the team lost a single match at home in its last five and actually won 3/5. We think they have a much better chance but to be sure, we pick the draw no bet.

Vicenza did not strike any deals in the last transfer window which was unfortunate but they seem to have found at least some chemistry as they won multiple matches at home in recent months. The team is in a great position to finish in the play-in zone, which will give them a chance to play two final games for their place in the league.

Crotone's recent seasons have been unfortunate after the team dropped from the elite. There is a good chance that we will see them get relegated again into Serie C. They have shown no improvement and are yet to win their first away game this season. With the remaining fixtures in their schedule, it might not happen at all.

Top Betting Odds and Stats for Vicenza vs Crotone

FAQs regarding Vicenza vs Crotone 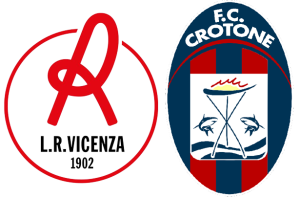 In which places are Vicenza and Crotone?

Both teams have been in the relegation zone since the start of the season and they remain there. Vicenza are 17th with 24 points while Crotone are 19th with 20 points.