Two of the weakest teams in Seria B face off in an important game from the 24th round on Saturday. Will SPAL finally find the strength to get out of the relegation zone or will Vicenza surprise us with a rare win?

SPAL had so many chances to climb the ladder and finally get out of the relegation zone but they have been failing week after week. A match against Vicenza is the perfect opportunity for any team to score three easier points.

This game can either be played for the both teams to score option or the over 2.5 alternative. We think that both bets will be easy wins, so choose the one you prefer the most. We have the two teams with the most over 2.5 games this season in Seria B – Vicenza and SPAL. The hosts have had it in 12/23 games while SPAL in 11/23. It is true that these are not many games overall but Seria B is one of the leagues with the least goals in Europe overall. Still, both teams have had 2.8 and 2.6 goals on average per game.

At the same time, we have their head-to-head games, which have almost always been extremely goal-packed. For example, four of their last five h2h games had more than 2.5 goals. At the same time, both teams scored in 4/5 too. The last three games between them ended with the whooping 3:2, 2:2, and 3:2, so we have high expectations for this match here.

A draw is the most likely result that we will see here. Neither side is in good shape and both need the points desperately. As you saw, the matches between them are always close and you never know which side will prevail until the final whistle. SPAL conceded 7 goals in their last two games, so they will be motivated for a better result against one of the weakest teams in the league. Vicenza have also had predominantly losses this season and any match against a team out of form is a rare opportunity. We think that we will see another 2:2 between these two teams, so consider this as an alternative bet at high odds too.

We continue with a third and final bet at high odds and it is for Vicenza to score at least two goals. This is a difficult bet overall, no matter the opponent or form. Vicenza are definitely not a high-scoring team but this rivalry has given us some incredible games in recent years and we think that it will be another one of those games. SPAL are the lowest-scoring away team in the league, so we think that this market is ‘safer' for Vicenza. The hosts had quite a few high-scoring games recently where they netted more than 1 goal. They scored twice against Pisa, Alessandria, Cittadella, and Benevento recently.

Top Betting Odds and Stats for Vicenza vs SPAL

FAQs regarding Vicenza vs SPAL 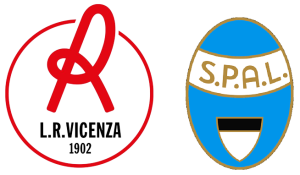 • In which places are Vicenza and SPAL?

We have two teams that have the same ambition for this season – to save themselves from relegation. While this dream seems almost impossible at this stage for Vicenza, you never know when they will enter a better form and surprise us – the team is 19th currently with just 13 points. SPAL have been slightly better and are 16th currently with 23 points.

This match will take place at Vicenza's home ground – Stadio Romeo Menti, which has a capacity for 12,000 spectators.

This game has been scheduled for 13:00 UTC on Saturday.