Vissel Kobe will host Urawa Reds in an interesting match from the bottom of the table in the Japanese elite.

Vissel Kobe have had a disastrous season and although it is not too late yet, the team needs to improve as soon as possible.

Both Vissel Kobe and Urawa Reds have been having terrible seasons and need to improve in order to achieve something. While both sides have terrible attacks, the matches between these two teams often are incredible and extremely goal-packed. They played once this season already and the match ended in a 2:2 draw when Urawa were the host. In fact, four of the last five games between them had both teams scoring goals and over 2.5 at the end.

It is difficult to predict the outcome of this match when both sides have been struggling to win their games. Vissel Kobe have not been as bad at home over the past couple of months and lost a single match in their last 8 home games. Of course, half of those were for other tournaments but they count. Urawa Reds have struggled on the road and have not yet won a single game in the league when away from home. That makes for 4 draws and 4 defeats in the first eight attempts.

When it comes to corners, Vissel Kobe are one of the teams that has had the most in the new season. On average, Vissel have had 10 corners in their match and they also take 5.3 per game individually. Urawa's stats are not as great but they have also had more than 8 corners on average in their matches. The first game between these two teams this season had 16 corners at full time.

Vissel Kobe have been one of the strongest teams in Japan for years and this new seasons is absolutely shocking. Vissel finished at 3rd place last year while in the new season, they will be fighting for their place in the league. Vissel Kobe have won only 2 matches in the first 17 rounds and they have the tied 3rd worst attack in the league as well as the tied 3rd worst defense in the league. Their goal difference after 17 games is 15:25.

Urawa were one of the best teams in the previous season as well and even won the Japanese cup last year. They finished at 6th place in the domestic league and had some of the best results. The new campaign has been a struggle for them too although their performance has not been as bad as Vissel Kobe's. Urawa's goal difference after 17 games is 18:16.

FAQs regarding Vissel Kobe vs Urawa Reds Coverage and Accessibility 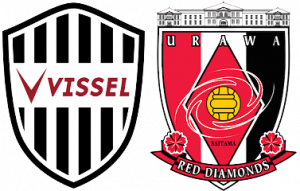 Urawa Reds and Vissel Kobe are near the bottom of the table. The hosts are the weakest team with 11 points at 18th place while Urawa Reds are 13th right now and have 18 points.