Walsall and Carlisle will face each other in the final match of the 42nd round in League Two on Friday.

If we have to talk about similar teams, it doesn't get any closer than Walsall and Carlisle. These sides have had identical seasons.

Carlisle and Walsall played one of the most boring games we saw this season at an earlier stage and we do not really expect much from them in this fixture either. Neither side is particularly strong in attack and we do not expect a lot of goals here. All three of the most recent h2h games from this and the previous season in League Two ended with less than 2.5 goals.

As explained, these two teams have been moving in an identical way this season and even their most recent stats are similar. Both sides have not won a match in three consecutive games. At the same time, before those three, Walsall had four consecutive wins at home and on the other side, Carlisle had three wins in a row on the road too. They were extremely equal in the last h2h game this season and we expect this to end in a draw.

Walsall had an active transfer window and some players were sold while others arrived from good English sides. Overall, the team should be preparing for a better campaign next year as the season for them is over this year. They are safe from relegation although a few more points will not hurt them.

Carlisle also had some improvements in terms of arriving transfers and for some time, it seemed like they were getting much better. However, the season is as equally over for them as it is for Walsall and we do not expect any significant results from them until the end of this campaign.

Top Betting Odds and Stats for Walsall vs Carlisle

FAQs regarding Walsall vs Carlisle 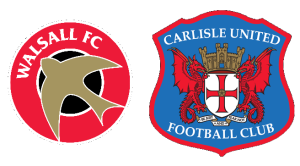 In which places are Walsall and Carlisle right now?

These two teams are exactly next to each other with identical stats. Walsall are ranked higher due to their better goal difference at 18th place with 47 points. Carlisle also have 47 points and are sitting in 19th place right now.

This match will be played at Walsall's home ground – Bescot Stadium.