Crawley had an acceptable start to the season and it seemed like the team will be in the promotion race until the end but the past couple of months have shown a completely different picture – Crawley have been among the teams in the worst form for weeks. Even a match against an average team like Walsall seems like a serious challenge but the truth is that both sides have an equal chance to take the three points home.

Walsall and Crawley have not impressed us with anything this year – not in the cup tournaments and definitely not in League Two. This match is an opportunity for both sides to get a rare win after some terrible losing streaks.

This might be unexpected but we believe that there is a good chance that we see just one of the teams with a goal or even neither of them. The teams are generally on the same level although Crawley have had a much more terrible run lately. Nevertheless, they have not had a lot of BTTS games away from home this season – just 3 in 8 visits. Walsall's stats are similar, so we suggest this option for a small stake.

Crawley have been among the teams with the worst forms for about two months now but we do not expect them to lose this match. Walsall have been having certain issues lately and have not been scoring a lot of goals. Moreover, they have also not won a lot of their recent matches after that incredible positive streak of wins and draws from the earlier stages. Crawley have won 3 out of their last 5 matches away from home in the league and with both teams being absolutely levelled, it is possible to see them get a point or even all three here.

As mentioned above, Walsall's recent performances have been disappointing. This includes their games in the league and the English cups. They have scored in just 2 of their last 7 games in all tournaments, and overall, the team has not scored more than once in many games this season. On the other side, Crawley have conceded more than 1 goal in just 3/8 away games in the league and actually, did not concede goals in another 3/8. There is a good chance that Walsall will not score at all but even if they do, we do not expect more than one goal.

Top Betting Odds and Stats for Walsall vs Crawley

FAQs regarding Walsall vs Crawley 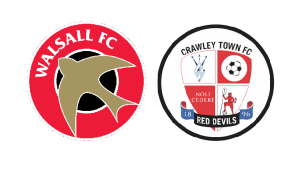 • In which places are Walsall and Crawley currently?

Walsall and Crawley are separated by just three points in the table – Tuesday's hosts are 14th with 24 points while their opponents currently occupy 19th place in the league with 21 points. A win here for Crawley will put them side by side at the middle of the table.

This match will be played at Walsall's home ground – the Bescot Stadium, which has a capacity for 11,300 spectators.