Waterford will face Dundalk in the second match from the FAI Cup in Ireland on Friday.

Dundalk are the much bigger team here but their form has not been impressive lately and this game could have a surprising result. Here are our predictions.

Dundalk are one of the biggest clubs in the country while Waterford got relegated to the lower division last season. This should make it obvious which team is the favorite and what we can expect from them but Dundalk actually do not have a great record against this opponent. They played a bunch of times over the past couple of years and into the last five, Dundalk have just two wins. Wateford scored goals in most h2h games.

Dundalk have not been doing great lately and especially when it comes to games on the road. The team has been conceding multiple goals per game against significantly weaker opponents on the road – 3 against UCD, 2 in the previous Cup game against Wexford, 3 against Shamrock. Overall, we expect them to score but we also expect Waterford to score in this game.

Dundalk will be the huge favorite in this match but we actually expect that they will have a difficult game and Waterford could end in a draw. Dundalk had a draw against a weaker opponent in the face of Wexford in the previous round of the FAI Cup too. The hosts are in a good form with a single defeat in the last 7 games overall, and they are a good home team overall.

Waterford were in the elite league of Ireland last season but got relegated as one of the two weakest teams. In the current campaign, they have been one of the best teams in Division 1 and will get a chance to get promoted as long as they win the playoffs in the end. The team has a solid defense overall and one of the two best attacks this season. It actually seems much better than Dundalk's right now.

Dundalk were once the most dominant teams until a few years ago and were the champions almost every season. The past few seasons have been disappointing for them and the team definitely has more to improve. They are doing good this season and are close to the top but Shamrock Rovers seem like they will not let go of that title once again.

Top Betting Odds and Stats for Waterford vs Dundalk 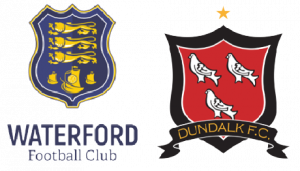 In which places are the two teams in their respective leagues?

Both team are 3rd in different leagues right now. Dundalk have 53 points after 30 rounds while Waterford have 49 points after 27 rounds.