The Irish Premier Division’s bottom two clubs meet at the Regional Sports Centre when Waterford host Longford Town on Friday. Read our expert predictions and find the latest odds for the contest below in our match preview.

Longford Town are without a win in 23 Premier Division matches ahead of their trip to take on Waterford. Read our top three predictions for Friday’s clash below.

Waterford’s four-game winning streak came to an end at high-flying St. Patrick’s Athletic last week, though we’re tipping the rapidly-improving Blues to get straight back to business against bottom club Longford. Town have failed to win any of their last 23 Premier Division assignments and having already lost twice to Waterford this term another disappointing evening is on the cards.

Waterford are one of the Premier Division’s most-improved sides and their development has been built on solid defensive foundations. With their sound defensive structure a factor, under 2.5 goals has landed in five of their last seven league matches and we expect another low-scoring affair when the division’s lowest scorers, Longford, arrive at the Regional Sports Centre on Friday.

Waterford to Win to Nil

Drawing from the same reasoning above, bettors could find success by backing Waterford to win to nil this week. Goal-shy Longford have failed to score for three straight Premier Division tussles and they managed to score only once in their last six meetings with Waterford combined. The Blues beat Town to nil when the sides last faced off in Waterford in April and another clean sheet for the hosts looks possible on Friday.

Waterford slipped back to second last place when they were beaten at St. Pat’s last time out, though the Blues’ competitive performance against one of the Premier Division’s leading clubs highlighted just how much they have improved under manager Marc Bircham. On their own patch, Waterford have collected seven points from the last nine on offer despite a taxing gauntlet of fixtures against some of the competition’s biggest names.

Longford’s campaign has been an overwhelmingly miserable one, though their 3-0 defeat at home to fellow relegation candidates Finn Harps last week felt like a fresh nadir. Town haven’t won a single Premier Division match since their opening day triumph over Derry City and a swift return to the second-tier is inevitable.

Top Betting Odds and Stats for Waterford vs Longford Town 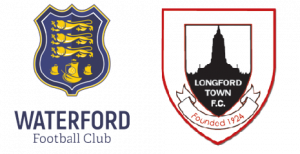 Friday’s game will be played at the Regional Sports Centre in Waterford.

Which player should I look out for this week?

Junior Quitirna has scored three times in his last five appearances for Waterford and the midfielder is one to watch again on Friday.