One of the two top teams in the 2. Bundesliga faces the weakest side in the league – Werder Bremen take on Ingolstadt in the last early game on Saturday.

Ingolstadt have actually been quite good recently and lost just two out of their last 5 games. Werder Bremen, in turn, have been the best team over the past three months and are looking towards the top spot in the league.

There could hardly be a better matchup for an over 2.5 bet than Werder Bremen vs Ingolstadt. The hosts have the tied-most games with at least three goals in the league – 17 out of 22 total. The team has had an average of 3.3 goals per game throughout the entire season. On the other side, Ingolstadt also had a bunch of those games – 14 out of 22. Their seasonal average is 2.8 goals per game. More notably, Werder Bremen have had over 2.5 goals in 10 consecutive games while Ingolstadt – in 5/7 recent games. The last game between them in September ended in a 0:3 win for Werder Bremen. In this match, we might even see Ingolstadt score as the team has shown some improvement.

Ingolstadt played some good matches in recent weeks but we think that Werder Bremen will be too strong of an opponent for them at this point. The hosts have been dominating every single team they meet – weak or strong. Since the odds for their win are almost inexistent, we would rather go for the half time result for them. We think that there will be early goals in this fixture, perhaps an over 1.5 before half time. It should be noted that Werder score first in most of their games – as least in 5 out of their last 7 matches. They should be the one to score first against the weakest opponent in the league.

Top Betting Odds and Stats for Werder Bremen vs Ingolstadt

FAQs regarding Werder Bremen vs Ingolstadt 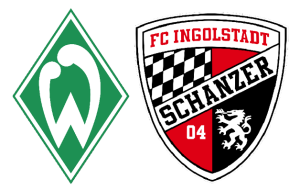 • In which places are Werder Bremen and Ingolstadt?

Ingolstadt still have a long way before we could even consider the possibility that they might not get relegated. Even with their recent wins, the team remains last in the league with just 14 points. Werder, in turn, are tied with the current leaders with 41 points.

Ingolstadt have one of the weakest offenses in the league and the second-worst defense. Their goal difference is 20:41 after 22 rounds. Werder Bremen, in turn, have one of the strongest attacking sides and have scored 43 goals in 22 games. At the same time, they conceded 30.

This match has been scheduled for 12:30 UTC on Saturday, February 19.