The EFL Trophy is down to its last four contestants and the two fixtures will be played this week. First off, we have Wigan vs Sutton.

Wigan and Sutton have been among the best teams in their respective leagues and it is quite obvious why Wigan are the favorite here. Nevertheless, anything is possible in the EFL Trophy.

We have a good opportunity for some specific markets and the over/under market is our top choice. We have two teams that rarely have games with over 2.5 goals in their respective league. Of course, there should be some obvious difference in class here and bookies expect that Wigan will win this easy. We do not think so, however, as if Sutton were weak, they wouldn't have reached this point of the tournament. Eight of Sutton's last 10 games ended with less than 2.5 goals. Wigan, on the other end, do not concede a lot of goals and it will be difficult for Sutton to score a lot too. We should see an easy under 2.5 here.

Although we think that Sutton have some chance, Wigan are a much better team overall. After all, Wigan are on their way to the Championship. Moreover, their home performances have been incredible this season while Sutton's outings have been disappointing in recent months. We think that we will see either a 1:0 or a 2:0 in this game. Wigan won 10 out of their last 15 home games in all tournaments and lost only two matches. Sutton's recent form had them win only two of their last 10 games on the road in all tournaments.

As this is one of the cups of the lower tiers of English football, there aren't too many markets to choose from. Since we expect a low-scoring game, we think that this is the third-best option for this game. As explained above, Wigan's defense has been impressive in League One while Sutton are from the lower tier. Wigan is a team that performs best at the start of their games and we generally expect to seee most of the action in the first half of the match. We might see a goal after the break but we generally do not expect to see more than two and we do not think that Sutton will score.

Top Betting Odds and Stats for Wigan vs Sutton

FAQs regarding Wigan vs Sutton 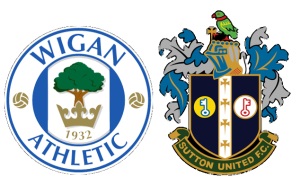 • In which places are the teams in their leagues?

This match will be played at Wigan's home ground – the DW Stadium.