Wrexham will face Eastleigh in a curious fixture from the opening round in the National League on Saturday.

Wrexham will be extremely motivated to win their opening fixture after that disappointing end to the season. Here are our predictions for this game.

Wrexham were the most dominant team last season and with the best attack in the league, so we expect them to have a strong start in this campaign as well. The least time the two teams played at Wrexham, the match ended with a 3:2 win for the home team. We expect them to be extremely dominant, especially after the terrible season-finished against Grimsby which was a 4:5 defeat.

We think that there is a huge difference between these two teams and Wrexham will be extremely motivated to show their potential in the opening match. They are the big favorite in this match and we think that they will search for an early goal or perhaps more than one. There is a lot of value for Wrexham to win at half time and then at full time.

While Wrexham were one of the top teams in the previous season, Eastleigh were one of the weakest and only showed some of their potential in the final rounds of the season. This is a team that is more than capable of scoring multiple goals on a good day and they also scored twice in the last fixture against Wrexham. We think that the hosts will win this game but Eastleigh will not go down without a fight.

Wrexham were the most dominant team in the previous season and lost just 8 games out of 44 rounds. They finished in 2nd place, unfortunately, due to the huge number of draws. Check out their stats, however. The team scored 91 goals in 44 games – the best attack in the league. We think that they will be one of the main contenders in the new season as well and will start it with a solid victory.

Top Betting Odds and Stats for Wrexham vs Eastleigh

FAQs regarding Wrexham vs Eastleigh 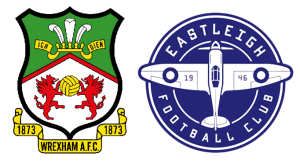 This fixture has been scheduled for Wrexham's home ground – the Racecourse Ground.