Wrexham will face Grimsby in the semi-finals of the National League play-offs on Saturday.

Wrexham will be extra motivated to win this fixture after losing the final of the FA Trophy tournament last week.

Wrexham and Grimsby are two completely different teams when it comes to goals. Wrexham are one of the teams with the most goals in their games this season and the absolute strongest attack in the league. Even though we saw goal-packed games from both sides lately, we have a lot of history between these two teams and with the importance of this match, we expect an under. The first time these two teams played this season ended with under 2.5 goals.

At this stage, we can easily see a draw or even an upset from the visitors but we do not expect any different result than the home win. Wrexham finished the season as the team with the second-best performance at home and they lost a single match in their 22 league home games. In fact, they lost a single match throughout the entire season at home. Grimsby are nowhere near as good on the road and will have problems.

Wrexham were dominating at home this season and scored 47 goals in 22 home games. Nevertheless, Grimsby have a strong defense and do not concede a lot of goals. We expect this match to be an easy under and we expect a 1:0 win for Wrexham if they win. It might be a good option to go for the under-market for Grimsby alone too.

Wrexham played an incredible season and finished it as one of the most dominant sides overall. They had one of the top defenses in the league and the absolute best attack – they managed to score 91 goals in 44 fixtures this season. They also reached the final of the FA Trophy, which they lost last week. After this unfortunate result, they will be extra motivated to win their semi-final bout and get one step closer to getting promoted.

Grimsby also had a positive season, obviously, but as the team with the most defeats in the entire promotion zone of the National League. Their attack is significantly less effective than Wrexham's as they managed to score just 68 goals in 44 matches. Defensively, they conceded exactly the same number of goals as their opponents – 46. They will have their chances to win but their performances on the road have not been as good.

Top Betting Odds and Stats for Wrexham vs Grimsby

FAQs regarding Wrexham vs Grimsby 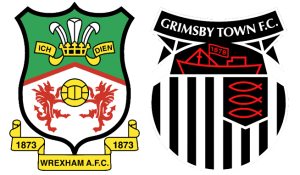 In which places did Wrexham and Grimsby end the season?

Stockport dominated the league and left Wrexham no chances to win the championship. The hosts remained second in the league with 88 points after 44 rounds. Grimsby, in turn, finished at 6th place with 77 points.

This fixture has been scheduled for Wrexham's home ground – Racecourse Ground.