Solihull Moors line up to make the consecutive third visit in their next fixture of the National League against Wrexham. Wrexham follow their long streak of home winnings coming into this game.

Wrexham have gained the momentum of recent successive home victories across various competitions and are yet to lose from the previous 13 overall games. On the other hand, Solihull Moors are also undefeated in the last four away outings, winning three of the recent five. However, the Moors have a horrible record of defeats in all of the visiting H2H against the Dragons. So we see the hosts fancy their chance once again in this attempt.

Wrexham’s front line has been remarkable in the recent games that rattled the net 20 times in the last five outings. Solihull Moors also make the appearance after scoring two goals in the previous game, giving a total of ten in the recent five attempts. Moreover, the last three H2Hs of these witnessed a total of over 2.5 goals. Given this, we will be looking for the same pattern to be followed in this game as well.

The hosts hold a long sequence of scoring goals in their home stadiums and didn’t miss the target in 2022 so far. The Moors are also not so far in this regard, remaining unable to score in only one of the recent attempts. The last two duels between these teams also featured both teams on the scoring sides. So we expect the same but the visitors will be with a low score as Wrexham kept two clean sheets in the last four home games.

The Dragons got a surprising victory of 3-2 previously against Eastleigh by scoring a penalty at the additional time of the game. winning 22 games out of 36 rounds, Wrexham are second in the table with 74 points, having a difference of eight points from the top. The team manager Phil Parkinson will enter the game with zero players on the injury list.

The Moors went back to the away winning track with a 0-2 victory in the recent outing against Barnet. The team managed 20 wins in the 37 games of the season and 11 draws alongside, standing at the fourth position on the table. The club gaffer Neal Ardley owns a completely healthy squad for selection ahead of this game.

Top Betting Odds and Stats for Wrexham vs Solihull Moors

FAQs regarding Wrexham vs Solihull Moors Coverage and Accessibility 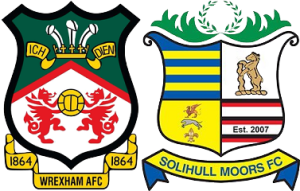 Where is the game being played? Racecourse Ground.

Who is the bookmakers' favourite to win? Wrexham.