With just three games left from the season in the Relegation Group of the Chinese Super League, Wuhan are almost certainly safe from relegation. Even if the team losses all three remaining games, they are unlikely to fall into the group of the worst two teams. Qingdao, on the other hand, need all the points they can get to remain in the league next season.

Qingdao have been the absolute worst team this season – just 10 points in 19 games. That is 10 points out of 57 available. The team is at the bottom and has almost zero chances to succeed. Yet, there are three games left and it is never decided until the mathematical chances run out.

The previous match between these two teams was the most goal-packed game since the restart of the season – a 2:5 win for Wuhan. That was two weeks ago and since then, nothing much has changed in either team. Wuhan remain the much stronger team while Qingdao continue with their bad results and have lost 4 out of 5 games to date. At the same time, four out of those five games ended with more than 2 goals. After the 2:5 in the previous match and the 4:0 two months ago for the Chinese Cup, we expect to see something similar in this closing fixture.

Match Result / Both Teams To Score – Wuhan Win and Yes

There is an obvious difference in class here and the hosts are the massive favorite to win this match but Qingdao will be motivated to show their best in this fixture. After all, they have just three more games to save themselves from relegation. Plus, they managed to score twice in the previous head-to-head game. While we normally wouldn't count on this, this particular match seems like a good opportunity. The odds for BTTS will be incredible once released, so this market is suitable for smaller bets.

Wuhan are the third-highest scoring team in the Relegation Group. Not that this record is really impressive but when the team in front is Qingdao, who have conceded 46 goals in 19 games, it means something. We mentioned the two recent wins in the head-to-head games – a total of 9 goals scored in 2 fixtures. Logically, we expect this to be a third consecutive game where Wuhan will show us their best football and score as many goals as possible – and easily more than 2.

Top Betting Odds and Stats for Wuhan vs Qingdao

FAQs regarding Wuhan vs Qingdao 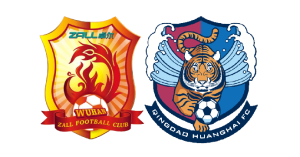 • In which places are Wuhan and Qingdao?

Wuhan are six points away from the relegation zone and with a much better goal difference. If they win this match now, they will be completely safe from relegation. The team is 4th with 19 points. Qingdao, as mentioned, are last in the league at 8th place with 10 points.

Wuhan have one of the better goal differences in the league although it remains negative – 21:26. Qingdao, on the other hand, have the worst one – 11:46.