This preview will cover the game between two strugglers – Wuhan and Tianjin Tigers – at the Suzhou Olympic Sports Centre Stadium. The two teams are at bottom of the group B coming into the game.

Wuhan came up with one of their mediocre defensive performances in recent weeks as they suffered a 2-1 loss against Beijing Guoan. Tianjin Tigers continued with their poor form with a 3-1 loss against Dalian Pro.

Wuhan to win the game

Wuhan will be wary of avoiding another losing streak after the team slipped back into losing ways in the game against Beijing Guoan. However, Tianjin Tigers have been performing rather poorly and they have been one of the worst teams in the Chinese Super League over the last five matches. The defence has been all over the place for Tianjin Tigers and Wuhan should be able to take advantage of the situation – even with their poor form – for the first win of the season.

A few defensive lapses ended up costing Wuhan quite dearly in the game against Beijing Guoan but the team has been able to avoid dropping to the bottom thanks to the other results. Wuhan were able to get a victory over Tianjin Tigers when they last hosted this opponent in August 2020. Li Xiaopeng does not have any injury problems.

Tianjin Tigers are on course to finishing bottom of group B and relegation is already looming for the club due to the lack of any momentum or confidence in their play. Genwei can concentrate on preparing for the game with a full squad at his disposal. 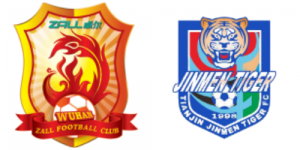 Wuhan get the status as the favourites for this match.