York will face Wrexham in the final match of the 22nd round in the National League on Saturday.

Wrexham continue their fight for direct promotion while York City continue to decline. Here are our predictions.

Wrexham are definitely not the extreme high-scoring side from the start of the season although they still score 2-3 goals per game. The main issue we have here is their form on the road – Wrexham have definitely not been convincing and have just one win in the last five games. They scored more than one goal in just one of those five games. We expect them to win this but with the minimal result.

Wrexham should be able to handle York City now, when they are in their worst form of the entire season. York City have not won a match in eight consecutive games in all tournaments. The team has not scored more than a goal in those eight games and generally, they lost almost every single time. Wrexham should use this opportunity for three easy points.

We do not think that Wrexham will score just once in this match – this is the perfect opportunity to return to the convincing away wins and the team should take advantage. York City definitely have a solid defense and the main problem is the attack, which is why we do not expect them to score in this game.

York got promoted to the league after winning the promotions in the National League North. Overall, it was unexpected because York generally were nowhere near the top teams in the league last season. Their defense was weak and their attack was nowhere near as good either. In the new season in the National League, they had their chances for the playoffs earlier but with that current form, we do not think that it is possible anymore.

Wrexham were supposed to be promoted to League Two last season but lost at the semi-finals of the playoffs with 4:5 – unbelievable. We definitely will see them again in the playoffs this season but the team is more than capable of getting promoted directly. As long as Notts County make more mistakes, of course. Wrexham have the best attack in the league with 50 goals in 18 games.

Top Betting Odds and Stats for York vs Wrexham

FAQs regarding York vs Wrexham 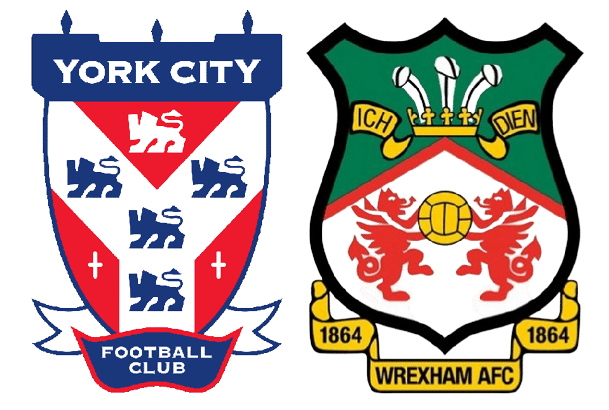 There is a 22-point difference between the two teams. Wrexham remain at the top of the league with 46 points while York City are 17th with 24 points.

The teams last played in 2017 and Wrexham destroyed York with 1:3 on the road.

Wrexham are a huge favorite ahead of this match, as usual.