Zrinjski will face Tirana in the second leg of their Europa Conference League qualifiers on Thursday.

Zrinjski won the first match perhaps by surprise but they are the huge favorite in this second match. Here are our predictions.

Perhaps there are expectations for a much more thrilling game between these two teams but we do not see it that way. Zrinjski are a team with a solid defense that rarely have goal-packed games and we do not expect them to allow a lot of goals against a weaker team. Not that Tirana are a bad side for this level of football but they are not a high-scoring team either and we think that they showed us nothing in the first match.

The first match was a 0:1 win for Zrinjski and we expect a similar or a better result for them in the second leg. Tirana were the home team last week and they barely had one or two accurate shots and never really created dangers for Zrinjski. We think that the home team will dominate throughout this match even more and we should see a much easier game than that previous match.

The corners lines for this match are surprisingly low and that is perhaps because people do not expect much from Tirana. They did take 5 corners in the first match and we expect them to at least get to 2-3 in this one as well. On the other side, Zrinsjki took 5 in the first match and while they were on the road. Now as the home team, we expect even more offense from them and it should have a lot of corners.

Zrinjski are the current champions in Bosnia and they shockingly lost in the first stage of the Champions League qualifiers against a weaker opponent. The team is a big favorite here and has great chances to even reach the group stage of the ECL. They dominated their domestic league and won the championship with a single defeat in 33 rounds. Their goal difference was also 74:14, which is unbelievable.

Tirana are the current champions in Albania and just like Zrinjski, they failed to win against a much weaker team in the Champions League. The team has been dominating the Albanian elite league for a while and they have spectacular results, just like Zrinjski. They won the title last season with a goal difference of 64:27. They will have a chance in this match but we think that they are the much weaker team out of the two.

Top Betting Odds and Stats for Zrinjski vs Tirana

FAQs regarding Zrinjski vs Tirana 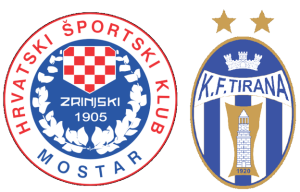 When does it start?