This preview looks at defending champions Club Brugge taking on Zulte-Waregem in an away match. So far, both teams have displayed enough reasons to be quite pleased.

Zulte-Waregem managed the first win of the league campaign after a 2-1 success over Sint-Truiden. Meanwhile, Club Brugge were pegged back by a 1-1 draw against Sint-Truiden. Vormer almost seemed to have given Club Brugge a victory, but an injury time goal from the opponent changed the game's outcome.

Club Brugge to win the game

Club Brugge have clearly made a disappointing start to the new season and the return of just one win from the opening three matches does not sound good under any circumstance. Zulte-Waregem have home advantage but this is unlikely to make a huge impact with Club Brugge exposing the opposition with three consecutive wins. Despite the poor start, Club Brugge are in a good position to get only their second win of the season.

The feature of Club Brugge’s games against Zulte-Waregem have been the goals with Club Brugge managing a remarkable 18 while conceding just only three. The start of the season has not been great by Club Brugge and their defence lacks shape even now. This could end up driving up the total goals in this game.

Goals from both clubs

Club Brugge’s primary concern ahead of this game will be the decent offensive form shown by Zulte-Waregem. In the opening three rounds, Zulte-Waregem have been able to get at least a goal in all three games. The same cannot be said about Club Brugge who have far greater expectations. The clean sheet against Union Saint-Gilloise is the sole clean sheet for Club Brugge in four games.

Zulte-Waregem has so far come up with some decent performances that is likely to increase expectations ahead of this match. The positive experience with regard to the opening three matches culminated with the high of a 2-1 win over Sint-Truiden. Luka Zarandia and Alessandro Ciranni are the players unavailable for Francky Dury.

Club Brugge’s key objective of the season will be to finish at the top of the table. The selling of some key assets over the summer has led to fans being concerned about the departure of Odilon Kossounou, who has moved to Bayer and Bayern Leverkusen. There is a clear lack of confidence in the team. Coach Philippe Clement does not have any injury problems ahead of this game.

Top Betting Odds and Stats for Zulte-Waregem vs Club Brugge

FAQs regarding Zulte-Waregem vs Club Brugge 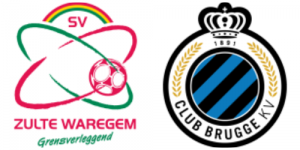 Where is the match scheduled?  Elindus Arena

Which team is the favourite to win? Club Brugge