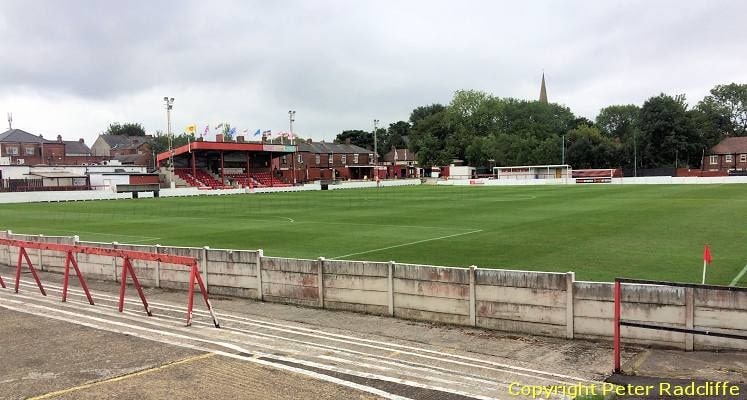 Opened in 1884, Hurst Cross is one of the oldest football grounds still remaining in the country. The ground is largely an open one with open portions of terracing on all sides of the stadium. It is overlooked by a number of residential houses that can enjoy watching the game for nothing (that is if they were to open their curtains) and the nearby Saint John the Evangelist Church at one end.

On one side is the small covered Sid Sykes Main Stand. This stand runs around a quarter the length of the pitch and oddly is located on one side of the halfway line, although more likely the pitch has been moved at some point. This stand has a capacity of 250 seats and has a number of supporting pillars. It contains the players tunnel and has an enclosed glassed area at the back for the stadium announcer and Directors area. It also has a number of flags that adorn the roof of the stand. One one side of this stand is an open standing terrace, while the other is occupied by club buildings including the social club.

Opposite is the Popular Side, which is a small covered terrace that runs for around half the length of the pitch and straddles the halfway line. To either side of this covered area are open areas of terracing. Both ends are open terraces with the Lees Road Terrace being larger than the Rowley Street Terrace opposite. The ground has a set of eight floodlights, four of which run down each side of the ground.

There is a small club shop inside the ground which stocks quite a large number of old football programmes.

Ashton United currently play in the BetVictor Northern Premier League Premier Division, the seventh tier of English football. This is at Step 3 below the Football League and one League below the National Leagues North and South.

Normally fans are not segregated at Hurst Cross. On the rare occasion that supporters are segregated then away fans are housed in the Lees Road End Terrace. This end is open to the elements so hope it doesn’t rain.

There is a social club at the ground itself which welcomes visiting supporters. The bar which is open throughout the game serves real ale and shows Sky Sports. Just outside the entrance to Hurst Cross is the Hare & Hounds pub. It is located on King’s Road and is situated in-between a bookmakers and Fish & Chip shop, although the latter is closed on Saturdays. A few minutes walk away on Nook Lane is the Royal Oak pub. If arriving by train then near to the railway station on Wellington Road is a Wetherspoons outlet called the Ash Tree, which is also listed in the CAMRA Good Beer Guide.

Leave the  Junction; M60 at Junction 23 and take the A6140 towards Ashton Under Lyne. Keep on towards the town centre and after passing a large IKEA store on your left, keep straight on at the traffic lights towards Stalybridge. After passing Ashton Under Lyne Railway Station on your left, pass through a set of traffic lights and at the next set of lights bear left onto the A670 towards Mossley. Continue straight along this road as it becomes Mossley Lane and at the traffic lights with the Miners Arms on the right, turn left onto Queens Road. After padding an Asda store on the right then at the next set of main traffic lights turn left onto Kings Road and then take the first right, just before the Hare and Hounds, to reach the ground. There is no parking available at the ground itself for visiting fans but there is plenty of on-street parking available in the local area.

Ashton under Lyne Railway Station is located just over a mile away from the Hurst Cross Football Ground, or around a 20-25 minute walk. It is served by trains from Manchester Victoria. Leave the station by the main exit and turn left. Go straight on at the traffic lights and then take the next left into Cowhill Lane. (after you have crossed over the railway line do not be confused by Union Street on your right). At the end of Cowhill Lane bear right into Union Road. Keep straight along this road and it becomes Kings Road. After you have passed a church and with the Hare & Hounds pub over on the right, you turn left into Rowley Street. After about 50 yards the turnstiles are on the right.

Manchester Hotels - Find and Book Yours And Help Support This Website

If you require hotel accommodation in the Manchester area then first try a hotel booking service provided by Booking.com. They offer all types of accommodation to suit all tastes and pockets from; Budget Hotels, Traditional Bed & Breakfast establishments to Five Star Hotels and Serviced Apartments. Plus their booking system is straightforward and easy to use. Yes this site will earn a small commission if you book through them, but it will help towards the running costs of keeping this Guide going.

Map Showing The Location Of Hurst Cross In Ashton Under Lyne

If there is anything that needs to be updated or if you have something to add to the Guide to Hurst Cross Ashton United then please email me at: contact@footballgroundguide.com.

Special thanks to David Ibbott and Peter Radcliffe, for providing the photos of the Hurst Cross Ground Ashton United.