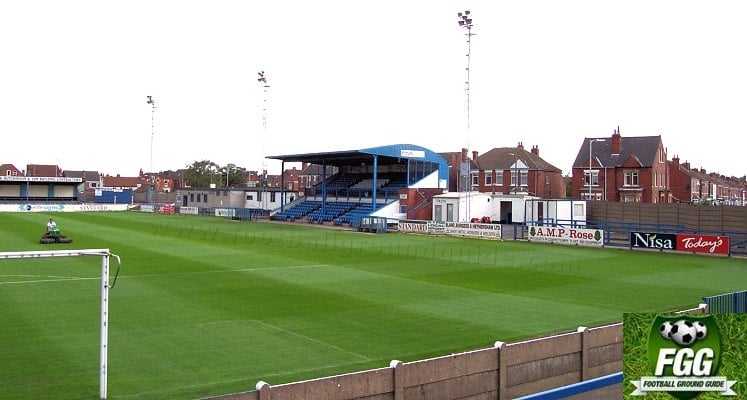 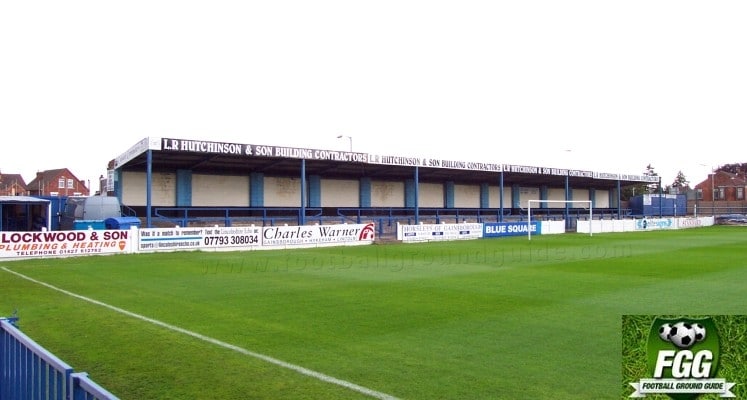 From the outside, the ground doesn’t look up to much, but inside it is a different story. Okay similar to a lot of clubs at this level the Club have a small covered all seated Main Stand that sits astride the half way line. The Ping Stand though as it is called, does have a bit more character than most, having a barrel-shaped roof and glass windshields to either side. There are open areas to either side of this stand that are not used as such for spectators unless you want to stand by the perimeter fence. Opposite is the small covered North Terrace, which like the rest of the ground looks tidy and well maintained. There is also a small covered terrace at Town End of the ground, whilst at the other end, there is a fair-sized steep open terrace. The ground is complete with a set of eight floodlight pylons, four of which run down each side of the ground.

Gainsborough Trinity currently plays in the BetVictor Northern Premier League Premier Division, the seventh tier of English football. This is at Step 3 below the Football League and one League below the National Leagues North and South.

There is the comfortable Blues’ Club next to the ground, which welcomes away fans. The Club has televisions showing sport and is featured in the CAMRA Good Beer Guide. The nearest pub is the Elm Cottage, which is only a five minute walk away. From the ground turn right along North Street, cross over to the other side of the road and the pub is just around the bend on the left. Otherwise, there are plenty of pubs in the town centre which is only around a ten minute walk away. These include a Wetherpoons outlet called the Sweyn Forkbeard on Silver Street. Also on Silver Street is the Eight Jolly Brewers. Both this oub and the Wetherspoons are listed in the CAMRA Good Beer Guide.

Generally an enjoyable visit. If in the rare event that fans are segregated within the ground, then the Northolme Terrace at one end of the ground is given over to away fans. Although a reasonable size, this end has no cover so it is open to the elements. In addition a small number of seats are made available in the Main Stand to those who need them. The view of the action from the Northolme Terrace is pretty good and you also get to enjoy views over the town and as well as the nearby All Saints Church, which seems quite appropriate for a ground which is nicknamed the ‘Chapel’ by the home supporters. The food on offer inside the ground is also well recommended.

Leave the M18 at Junction 1 and take the A631 towards Maltby, Bawtry and then  Gainsborough. As you reach Gainsborough you will cross over a river and at the traffic lights that is junction with the A156, turn left towards the town centre. Keep straight on this road, passing a Tesco Store and then the town centre on your left. You will reach the ground further along on the right. There is no parking available at the ground as such, although there is a small open air car park located across North Street, opposite the Club which costs £2. Otherwise street parking.

The closest railway station is Gainsborough Central Station which is located under half a mile away from the ground. It is served by an hourly service from Sheffield, although there is no service available after the end of midweek matches. You are far more likely to end up instead at Gainsborough Lea Road Station, which has more services running to it from Sheffield, Doncaster and Lincoln. However this is further away from the ground being just over a mile and a half away and will take 25-30 minutes to walk. It is though a fairly straightforward walking route:

As you come out of the station entrance turn left and proceed along the main road passing a Ford Garage. On reaching a roundabout take the third exit onto Ashcroft Road towards the town centre. Proceed straight along this road (A159) for around one mile, passing Marshall’s Yard on your right and you will reach the ground further along also on the right.

Adult £12
Concessions £8
Under 16’s £4
Pre school children: Free (When accompanied by an Adult)

Concessions apply to Over 65’s and Students.

Map showing the location of the Northolme Football Ground In Gainsborough

Gainsborough Hotels - Find and Book Yours And Help Support This Website

If you require hotel accommodation in Gainsborough then first try a hotel booking service provided by Booking.com. They offer all types of accommodation to suit all tastes and pockets from; Budget Hotels, Traditional Bed & Breakfast establishments to Five Star Hotels and Serviced Apartments. Plus their booking system is straightforward and easy to use. Yes this site will earn a small commission if you book through them, but it will help towards the running costs of keeping this Guide going.

Unofficial Web Site: None at present