The City Calling Stadium is one of only a small number of what you might call “out of town” grounds in Ireland. It is located three miles to the west of Longford Town centre, alongside the N5 Road to Strokestown. The ground shares its surroundings with flat open fields and a scattered collection of farm buildings. Located in a rural  setting the ground was opened in 1993, but the impressive all-seater stadium we see today is the result of a rebuilding program that began in 2001.

Once through the turnstiles the eye is immediately drawn to the Main Stand on the West side, sitting neatly astride the pitch centre line. This covered all seated stand has a capacity of 1,378 seats and looks quite striking with the large black letters of LTFC,  being incorporated onto the red seated area. This curious structure was built in two stages, the first phase seeing the construction of seven rows of seating, elevated on a concrete deck above the changing rooms and club offices, with a line of sturdy columns at the rear supporting a roof  seemingly too high above to offer any cover and with the rear exposed to the elements. The second phase saw the concrete deck extended to the height that we see today, with an extra 10 rows of seating and the rear gap filled in with breezeblock. It is also steeply built with a good height between rows. The stand is accessed by a set of 4 walkways from pitchside and pleasingly the lowest seating row is located at least two metres above the playing surface, offering a good view of the action. Further back though it may be a different matter with a row of eight supporting pillars running across the stand, meaning that those fans in the back rows may find their view restricted. The stand holds around 1,378 seated spectators in total, with LTFC picked out in black against red. The Main Stand is flanked by a covered players tunnel and single story clubhouse leading to the South End.

The rest of the ground is fairly straightforward to describe, essentially a U shaped single tiered open concrete deck which has nine steps and eight rows of seating, the lowest step being left without seats to provide ample room for a front access walkway, which help to give the ground a very balanced look. Both North and South stands have netting to stop stray balls hitting spectators though you suspect any shot that goes three metres above the crossbar is also likely to end up in the farmers’ fields or club car park.  There is a small scoreboard in the seated South-East corner and a tv gantry perched at the rear the of the East Stand and although the ground has a total of 6 floodlight pylons they are set behind the spectator seating areas and do not obstruct the view in any way. Although the South Stand at present does not run the full width of the pitch and there is no seating currently fitted in the North-East corner the three sides in total hold around 3,464 seats. In the South East corner of the stadium is a small electronic scoreboard.

The City Calling Stadium is of course, the current sponsors name for the Strokestown Road ground and with the previous sponsors Flancare being involved with the club from its re-development in 2001 right up to 2013 it would not be a surprise if older supporters still refer to the ground as Flancare Park, or rather more amusingly as some fans have described it; “The Flan Siro.”

Bearing in mind that the 4,842 all seater capacity is only ever likely to be tested if the club qualifies for European Competition, further additions to capacity seem unlikely. However, since the perimeter wall behind the North Stand is built up a couple of metres above the top row of seats it does suggest that a lean-to roof could be added at a later stage.

For games where segregation is in force then away fans are normally housed in the East Stand along one side of the pitch, as well as the Car Park (North) End. Both these areas have no cover and are open to the elements, so hope it doesn’t rain.

There is no bar at the stadium and as the ground is in a rural location, there is not much else around by the way of pubs. So really it is a case of drinking in the centre of Longford beforehand, which is three miles away.

Follow the N63 from Roscommon or R397 from Ballymahon into the South of Longford. Continue onto the N63 through Longford Town centre then turn left onto N63 Connaght Road, following the road over the railway line. At the N5 Roundabout continue on towards Strokestown, the ground is located on the left hand side around half a mile beyond the roundabout.

Follow the N5 through Tulsk & Strokestown, the ground is located on the right hand side, approximately three miles before you reach Longford.

Follow the N4 from Edgeworthstown around and then onto the northern outskirts of Longford.  At the roundabout which is the junction wuth the N5, take the first exit onto the N5 in the direction of Westport. Then as From The North.

There is a good sized car park at the ground which is free.

Longford is located on the Dublin Connolly-Mullingar-Sligo Railway Line (Irish Rail). Journey time from Dublin is around 1 hour 45 minutes,and 1 hour 15 minutes from Sligo. There are six services throughtout the day that will get you to Longford in time for a 7.30pm Saturday evening kick off, however there are no services runing back in the opposite direction after 9pm!

Bus Eireann Service 23, from Busaras Dublin to Sligo follows a similar route as the train,and allthough journey time is longer at around 2 hours 20 minutes from Dublin, there are late evening and early morning services at 22.15 and 01.15 back to Sligo and 02.25am back to Dublin.

A ground is around a 50-60 minute walk as it is around three miles away. However this is NOT recommended, since there is no footpath or street lights for last half a mile between N5/N63 Roundabout and stadium. It may be more advisable to catch a taxi from either the station or Longford High Street and arrange to be brought back after the game. A taxi will cost around €10.

For those who still want to walk… When leaving the Railway Station follow the approach road to the left, then at the junction turn right into Longford Town centre. After five minutes walking along the Main Street, you will pass the Market Square Court and Post Office. After a further minutes turn left onto N63 Connaught Road. The road leads to an industrial estate, passing by Longford Wanderers FC before heading over the railway line. Continue walking along the N63 over the mini roundabout,and carry on straight at the second roundabout as the road becomes the N5. The ground entrance is a further half mile on the left.

WARNING: The final half a mile walk to the ground from the N63/N5 roundabout, is beside open farmland and has no footpath, and although the road is straight and wide enough for vehicles to avoid you,the lack of street lights make it dangerous when walking back into town after an evening game

Map Showing The Location Of The City Calling Stadium

Special thanks to Owen Pavey for providing the information and photos of the One Calling Stadium Longford Town.

Be the first to leave a review of Longford Town! 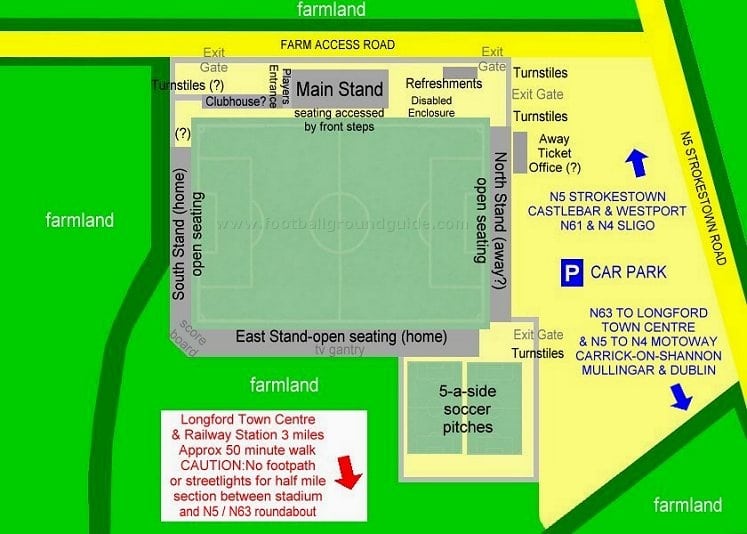