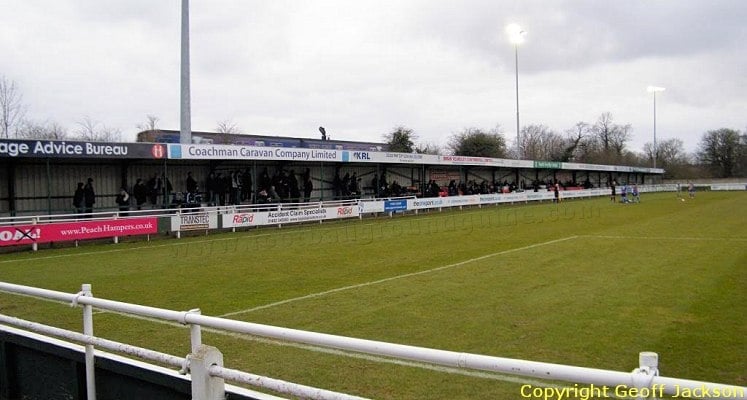 Grange Lane is well maintained and is situated in a pleasant semi-rural setting. The north side of the football ground is a strange looking affair. Mostly comprised of flat standing areas for spectators, it is dominated by the clubhouse and changing rooms block behind. A small cover has been erected over the front of the changing rooms exit in line with the half way line, which has on the front of it, in large green lettering; ‘North Ferriby United’. Some unusual looking team dug outs are situated in front of it. Opposite is a small covered stand that runs the full length of the pitch. This has 4 rows of new-looking green seats. There are 501 in total, with a small block of terracing at each end. It has a fair number of small supporting pillars running across the front of it, which don’t really get in the way at all. Both ends are small open standing areas, that contain just one step of terrace. There is a noticeable slope that runs across the pitch, from the Clubhouse side down to the South Stand.

The nearby All Saints Church is quite visible beyond one corner of the ground, whilst a number of houses overlook from the same corner. Just behind and above the South Stand on a raised embankment is the Selby Railway Line. This means that a number of trains can be seen during the game, on their way between Hull and Doncaster and Leeds. The stadium has a set of six modern floodlights, three of which run down each side of the stadium. Also just behind the South Stand is a large telecommunications mast. The ground is also used for Hull City reserve matches.

The ground for many years was known (and still is to many fans) as Grange Lane. In 2019 it was renamed the Dransfield Stadium in a corporate sponsorship deal.

A visit to Grange Lane is normally a relaxed a pleasant day out. There is a substantial and welcoming club house bar at the ground. Whilst inside the Club Shop has quite a good stock of old matchday programmes and club badges. There is a catering kiosk in one corner of the ground that serves the usual football fayre of pies (£2.50) and hot dogs.

If you arrive at the ground early and want to do a bit of ‘sightseeing’, then if you continue past the ground on your left and then go under a railway bridge, then take the second left into Humber Road. Then at the end of this road you can enjoy fine views of the Humber Bridge and the Humber River itself.

There is a Sports Bar inside the ground that welcomes away fans. It also has BT and Sky Sports television. Otherwise about a ten minute walk way on the High Street is the Duke Of Cumberland pub.

Follow the Eastbound M62. At the end of the M62 continue onto the A63 towards Hull. Stay on the A63 for seven miles until you reach the junction with the B1231 (signposted North Ferriby and Melton Industrial Area). Leave the A63 and at the end the long slip road you will reach a roundabout where you take the third exit. This takes you back over the A63 and at the next roundabout take the first exit towards Swanland and North Ferriby (B1231). After about a mile you will reach a crossroads (where there is a white sign post on the left and a Remembrance stone cross on the right). Turn right here into Church Road (signposted Station/Riverside Walkway). After passing the Church on the left, Grange Lane and the ground entrance are just a little further down on the left. If you go under a railway bridge then you have gone too far.

There is a car park at the ground, however this is for club officials only. For bigger games then the nearby Primary School on Church Road, offers parking at a cost of £2 per car. Otherwise there is street parking available on Church Road itself and other surrounding roads.

Ferriby Railway Station is only a five minute walk away from the Grange Lane ground. It is served primarily by trains heading to Hull which is about 16 minutes away. Doncaster is about 50 minutes away on the stopping service. There is a popular cafe on the Hull bound platform called the Old Ticket Office Tea Room.

As you come out of the station proceed up the road in front of you and then take the first right into New Walk. At the end of this road turn right at the Church into Church Road. The entrance to the ground is down on the left.

* When accompanied by an adult. League fixtures only.

In the current league: Gainsborough Trinity

Record Attendance
To be advised

Map showing the location of the Dransfield Stadium In North Ferriby

If you require hotel accommodation in North Ferriby or Hull then first try a hotel booking service provided by Booking.com. They offer all types of accommodation to suit all tastes and pockets from; Budget Hotels, Traditional Bed & Breakfast establishments to Five Star Hotels and Serviced Apartments. Plus their booking system is straightforward and easy to use. Just input the relevant dates and click on “Search” below or on the hotel of interest on the map to get more information. The map is centered on the football ground. However, you can drag the map around or click on +/- to reveal more hotels in Hull City Centre or further afield.