The ground is largely an open one, which is situated next to a housing development. On one side is the Main Stand. This small, tidy looking stand, runs half the length of the pitch. It straddles the half way line but is off centre from it. The stand is all seated and covered. There are no obstructing pillars and the floodlights pylons on that side are considerately located at the back and to either side of the stand. Next to the Main Stand on one side, is the teams’ dressing rooms to which there is a staircase that leads up to them. This stairway is enclosed in a metal mesh cage, to form a players tunnel, which doesn't give a great impression.

Opposite on the North side of the ground is a small open terrace and in front are located the team dugouts. As the dressing rooms are on the other side of the ground, then this results in a procession of club personnel across the pitch. The West End, also known as the Shed End, is a strange old-fashioned looking affair, having a small cover with a large number of supporting pillars running along the front of the six-step high terrace. It is also set back from the pitch and halfway along there is a large dividing fence and gate, which allows this end to be split between home and away fans if needed. The other end is a simple open flat standing area. There are a number of large nets suspended above the perimeter of the ground, in an effort to prevent balls being kicked out of the stadium and into residential areas. The pitch has quite a noticeable slope that runs from the West to the East End. The ground is completed with a set of eight thin floodlight masts, four of which run down each side of the pitch.

The ground was known for many years as the Throstle Nest, but was renamed recently as the Citadel. I also assume that at some point that the club changed colours as the ground is predominantly blue, whereas the current team plays in green.

Normally fans are not segregated at the Citadel. If segregation is in force then away fans are allocated half the Shed Terrace at the West End of the ground and all or part of the North Terrace on one side. The North Terrace is open to the elements and whilst the Shed End has some covered terrace, there are a number of supporting pillars running along the front of it that may impede your view. The Shed End is shared with home supporters, who are in close proximity on the other side of a fence, which makes for a bit of atmosphere and some lively banter! If fans are not segregated then you can enjoy a range of Pies and Pasties baked at the local Growlers Bakery in Pudsey.

There is a fair-sized clubhouse at the ground itself, which normally welcomes visiting fans. It also shows Sky Sports. The nearest pub which is around a five-minute walk is the Jug & Barrel on Town Street. If you have a bit more time on your hands then take the 10-15 minute walk into Farsley, where there are a few more pubs to be found along Town Street. Worth mentioning is the Old Hall Hotel on Back Lane just off Town Street, but also on Town Street itself, there are; the Village Wine bar, New Inn, Bay Horse and at the bottom of Town Street the Fleece.

From Junction 28 of the M62, take the A653 towards Leeds. After passing the White Rose Shopping Centre on your left, bear left where the road forks onto the ring road (A6110). Continue on the A6110 passing underneath the M621, following signs for Bradford (A647). You will join the Stanningley By-Pass (A647) still continuing towards Bradford. At the next roundabout take the third exit onto the B6157 Bradford Road towards Farsley. Go down the Bradford Road and turn left just past the Carstar outlet onto New Street. Then take the third right onto Newlands Road and the ground entrance is at the end of this road on the left. There is a fair-sized car park at the ground which is free.

New Pusdey is the nearest railway station. which is located around one mile away from the ground. It is served by trains from Leeds and Manchester Victoria. The station is around a 15-20 minute walk away from the Citadel. As you leave the station, immediately turn right and then right again take the pathway along the side of the railway. Follow this pathway until you reach an underpass on the left going under the railway, where you turn left. After emerging on the other side cross the road and turn left along the pathway with railings on either side. At the top of the road turn right and then turn left just past the Carstar outlet onto New Street. Then take the third right onto Newlands Road and the ground entrance is at the end of this road on the left.

Concessions apply to Over 60's, Under 18's and Students.

In addition, the Club offers free entry to serving members of the armed forces or emergency services.

* This is the record since the club were reformed in 2010.

Map Showing The Location Of The Citadel Football Ground

If there is anything that needs to be updated or if you have something to add to the Guide to the Citadel Farsley Celtic then please email me at: contact@footballgroundguide.com.

Special thanks to Jeremy Gould and Andrew Chapman for providing photos of the Citadel, Farsley Celtic. 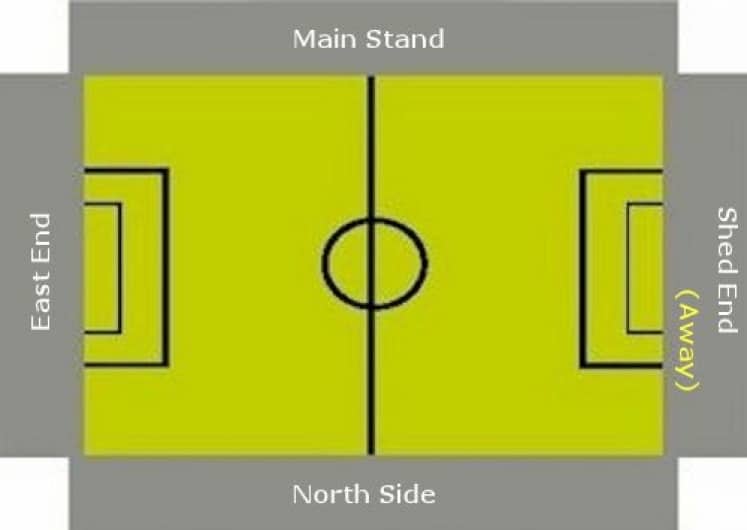