The ground is a fairly open one, with three sides being mostly open to the elements. On one side are two small all seated stands. Both are similar in height and design. The first was built as a replacement for the old Main Stand in 2009 and sits astride the half way line. The second is a little smaller in width and is situated towards the Railway End. Oddly the stands have a gap between them in which a floodlight pylon stands. Opposite a small covered terrace, which again is located towards the Railway End. This is a simple structure, with a few supporting pillars running across the front of it. On the other side is situated the club house. In-between are the team dugouts placed at pitch side. Both ends are small open standing areas, that are mostly flat or just have one step. Beyond the Railway End you get a nice view of the hills in the distance, beyond the tree line. The ground is completed by a set of eight small floodlights, four of which run down each side of the ground.

The Club have received planning permission to improve Nethermoor Park so that it can comply with current National Conference League criteria for ground grading for member clubs. This will involve the construction of two new covered terraces at either end and the installation of seating on the South side. It is anticipated that works will commence early in 2016.

Normally a welcoming club, that is an enjoyable day out. For most matches fans are not segregated, but for some high profile games segregation is put in place. In this instance away supporters are allocated the Railway End Terrace which has a capacity of 990 and the George Stocks Stand, which is one of the seated stands on the North side of Nethermoor Park. The George Stocks Stand can accommodate 210 seated spectators. As the Railway End is open to the elements it may be an idea to go for one of the seats in the George Stocks Stand, as this is covered. This stand also enjoys good views of the playing action.

If you have a bit of time on your hands then why not visit the first original Harry Ramsdens fish and chip shop. Now no longer owned by Harry Ramsdens, it is called the ‘Wetherby Whaler’ and is located further along Otley Road (A65) in the direction of Skipton. If travelling along Otley Road you will pass Nethermoor Park on your right and the ‘Wetherby Whaler’ is located further on also on the right hand side. Still excellent quality and you can eat inside in the ornate tea rooms. Visit the Wetherby Whaler website for more details.

There is a club house at the ground which normally admits away fans (unless segregation is in force inside the stadium). It has a wide selection of drinks available including real ales. The bar facility is shared with the neighbouring Cricket Club. A ten minute walk from the ground along Otley Road (going towards the centre of Guiseley) is Coopers. This pub is listed in the CAMRA Good Beer Guide and normally has eight real ales on tap.

For those who are CAMRA members, then on production of your membership card, you can gain admittance to the Guiseley Factory Workers Club. Located on Town Street, not far from the railway station, it is also listed in the CAMRA Good Beer Guide.

Leave the M62 at Junction 28 and take the A653 towards Leeds. After passing the White Rose Shopping Centre on your left, bear left where the road forks onto the ring road (A6110). Continue on the A6110 passing underneath the M621, following signs for Bradford (A647). Continue following the ring road for another eight miles, until you reach a roundabout that is the junction with the A65. Take the first exit onto the A65 towards Skipton. Continue on the A65 for four miles and you will reach Nethermoor Park on the right.

Car Parking
There is no parking available to visiting supporters at the ground. There is a large free public car park adjacent to the ground on Netherfield Road. To find this then turn right off the A65 (if travelling from Leeds) at the Station Pub, at the traffic lights in the centre of Guiseley. Then turn left into Netherfield Road after crossing over the railway bridge and the car park is about a quarter of a mile on the left hand side. The ground is about a hundred yards away and can then be accessed via a footbpath and a pedestrian footbridge over the railway. If using a SatNav then post code of the car park is LS20 9PD (Location Map). Otherwise street parking. However please note that traffic wardens are out in force on matchdays, so if street parking, please park correctly and considerately.

Guiseley Railway Station is only a five minute walk away from the ground. The station is served by trains from Leeds, Bradford Forster Square and Ilkley.

As you come out of the main entrance walk diagonally across the car park in front. In-between two car parking areas on the other side of the road, you should see a small pathway that takes you towards a row of terraced houses, called Morton Terrace. Follow this path down to its end and you will come out on the Otley Road. Turn right and the ground is further down on the right hand side.

If you wish instead to walk into the centre of Guiseley first, then on coming out of the station turn left and then at the top of the Station approach road, turn right. At the traffic lights with the Station pub on the corner, turn left for the shops. If you turn right you are in Otley Road. Nethermoor Park is further down on the right hand side.

Guiseley AFC Fixtures (takes you to the BBC Sports Website).

Map showing the location of Nethermoor Park in Guiseley

If you require hotel accommodation in Guiseley then first try a hotel booking service provided by Booking.com They offer all types of accommodation to suit all tastes and pockets from; Budget Hotels, Traditional Bed & Breakfast establishments to Five Star Hotels and Serviced Apartments. Plus their booking system is straightforward and easy to use. Just input the relevant dates and click on “Search” below or on the hotel of interest on the map to get more information. The map is centered on the football ground. However, you can drag the map around or click on +/- to reveal more hotels in the town centre or further afield.

Special thanks to Ben Robinson for providing the photos for this page. Visit his Football Grounds Blog. 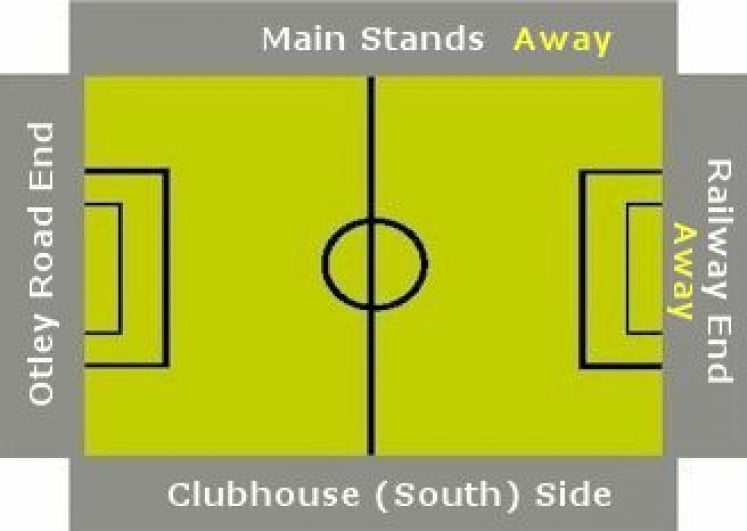