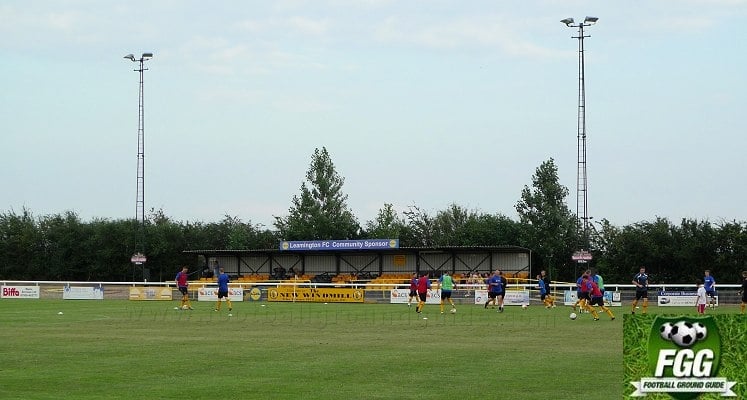 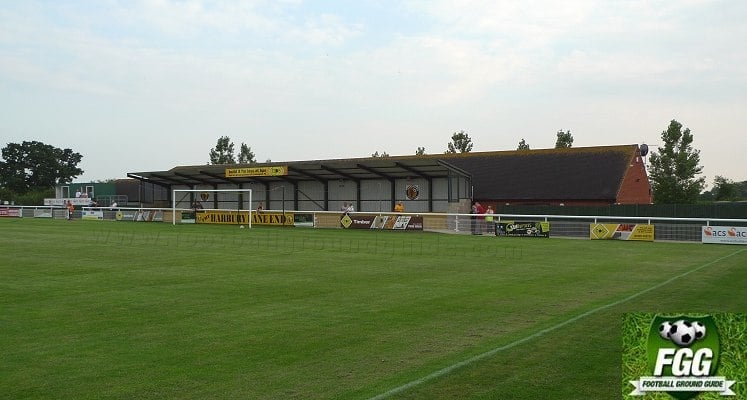 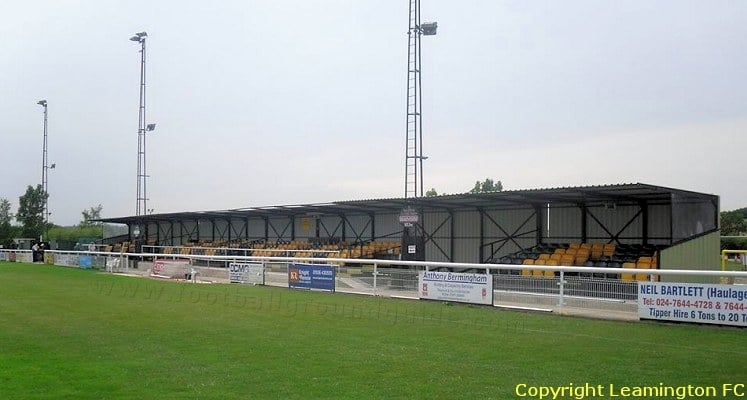 The ground is situated in the Warwickshire Countryside, a couple of miles outside of Leamington itself. A modern affair, it is a tidy looking ground, although generally quite an open one. At the Harbury Lane End of the ground (where the Clubhouse and main entrance are situated) is a small covered terrace. It runs for around half the width of the pitch and sits directly behind the goal. On one side is a flat standing area, whilst on the other side is a cabin-like structure, that serves as a corporate facility. Opposite, is the North Bank, a fair sized open terrace.

On the west side of the ground is the Main Stand. This covered all seated stand, has four rows of seats and runs for around 2/3rds of the length of the pitch. Although there are no supporting pillars, there are the bases of two of the floodlight pylons in front which could obstruct your view. Because of these pylons, the seating is split into three sections, although the roof is continuous. On the south of this stand, there is a programme shop, where just along from the main entrance turnstiles on this side is a separate club shop. At the North Bank End there is a new 4 step covered terrace, 15 yards long.

Opposite the East Side is mostly open with small flat standing areas running behind its perimeter. It did at one time have a small seated stand that straddled the halfway line, but in 2013 this was moved to the other side of the ground, to expand the seating area on that side. Towards the Harbury Lane End, there is a small temporary bank of 41 uncovered seats. These came from the old Oxford United Manor ground. Also on this side are the team dugouts.  In the North East corner of the stadium, there is a small electric scoreboard. The ground has a set of eight 'skinny' looking floodlights, four of which run down each side.

At the start of the 2015-16 season, the New Windmill Ground was renamed the Phillips 66 Community Stadium, in a corporate sponsorship deal.

Although the New Windmill Ground was opened in the year 1999, the Club are planning to move to a new stadium. The scheme which has been given the green light by Warwick District Council, will involve the construction of a 5,000 capacity stadium. This will be situated to the South of Leamington next to Europa Way near Gallows Hill. Not only will this move the club nearer to Leamington, but also create a larger capacity. Time scales have yet to be announced as to when works may start. Below is an artists impression of how the new stadium will look (courtesy of the Leamington FC website). 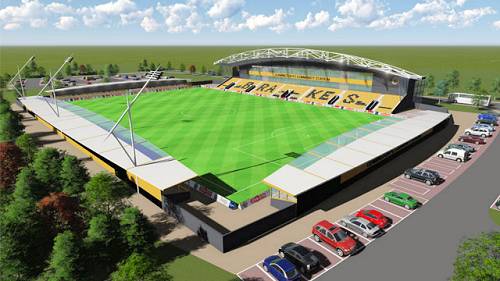 For most matches segregation is not in place. On the rare occassion that it is then away supporters are mainly housed in the open North Bank Terrace, as well as being allocated 50 covered seats in the Main Stand. Adjacent to the Main Stand towards the Big Bank there is a very small terrace that can house around 200 away fans too. In total around 1,000 visiting supporters, can be accommodated in these areas. A separate catering unit is brought in to the corner in-between the away sections for these games. Entrance to the away sections is at the opposite end of the ground to the club entrance and car park. Normally a pleasant day out in the countryside, with a relaxed feel. However, the grounds remote location means that there is little to do in the immediate area and it can be a challenge to get there using public transport.

Inside the ground is the Brakes Bar which is normally open to all fans, unless crowd segregation is in force. Although on the small side, it does employ a fairly effective queueing system. Also on my visit, they had offered a very quaffable real ale called 'Harry's Heifer' produced by the local Church Farm Brewery. Otherwise, as I mentioned before the ground is a bit out 'in the sticks' and I didn't come across any pubs near to the ground. Probably the closest country pub is the Leopard Inn, which is located two miles way in Tachbrook (CV33 9RN).

From The North
Leave the M40 at Junction 14 and follow A452 towards Leamington. You will cross a small roundabout and at the next take the 2nd exit (signposted Leamington A452/Heathcote Industrial Estate). You will reach another roundabout where this time you take the 4th exit (signposting Bishop's Tachbrook/Harbury). So straight across the traffic lights proceeding towards Harbury. After about another mile and a half, you will reach the entrance to the ground on your left.

From The South
Leave the M40 at Junction 13 and take the A452 towards Leamington. At the next roundabout take the 3rd exit (signposted Leamington A452/Heathcote Industrial Estate). Then as North.

Car Parking
There is a fair sized car park at the ground, which holds 350 cars and is free. Please make sure though that for the bigger games that you arrive at the ground early, as once this car park is full there is no street parking available near to the stadium. Also take care on exiting the stadium car park onto the main road, as local traffic tends to race along it.

Leamington Spa Railway Station is located around three miles away from the ground, so really too far to walk. The station is served by trains from Birmingham New Street, Birmingham Moor Street, London Marylebone and Reading. The Club have been experimenting in running a double decker bus operated by Ridleys, making two return journeys between the railway Station and ground at a cost of £2 return. Check the Leamington FC website for availability and departure times. The Supporters Brakes Trust, runs a 16 seater minibus for home matches that picks up at various points around Warwick and Leamington Spa, including Leamington Railway Station. All supporters are welcome and there is only a small charge for using it (£2 each way). Further details including pick up times can be found on the Brakes Trust website  Otherwise it may be best to take a taxi to the ground and then book one for your return.

Map showing the location of the New Windmill Football Ground

Find Hotels In Leamington and help Support This Website

If you require hotel accommodation in Leamington or nearby Warwick then first try a hotel booking service provided by Booking.com. They offer all types of accommodation to suit all tastes and pockets from; Budget Hotels, Traditional Bed & Breakfast establishments to Five Star Hotels and Serviced Apartments. Plus their booking system is straightforward and easy to use. Yes this site will earn a small commission if you book through them, but it will help towards the running costs of keeping this Guide going.

Special thanks to Leamington Football Club for providing the photo of the West Stand.