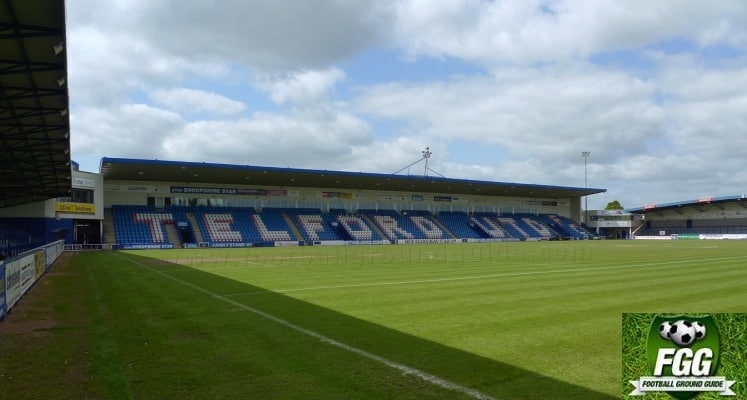 A comparatively new stadium that replaced the Bucks Head ground on the same site. It was built in stages beginning in 2000, with the works being completed in 2003. It is an attractive looking ground, with good facilities, including a hotel which is attached to the stadium.

On one side of the ground sits proudly the Sir Stephen Roberts Stand, named after a former Director and lifelong supporter. This single tiered, all seated stand, has a capacity of 2,200. It is smart looking and has executive boxes to its rear. On one side of the stand is a stadium control box, whilst on the other side of the stand are some offices, which gives the ground an enclosed feeling on this side. Both ends are covered terraces that are of similar design, both having semi circular roofs. On the remaining side of the ground, is an open terrace, called the Jack Bentley Terrace (after the Club's all time record goal scorer), which is dominated behind by the Club offices and study centre. To one side of this open terrace towards the Frank Naginton Stand is a small electric scoreboard.

Away fans are mostly housed at one end of the ground in the Frank Naginton Stand. This covered terrace has space for 1,300 fans. If demand requires it then a block of seating in the Sir Stephen Roberts (West) Stand can also be allocated. The stadium is also used by Wolverhampton Wanderers for reserve team fixtures.

Away fans are mostly housed at one end of the ground, in the covered Frank Naginton Terrace, where up to 1,300 fans can be housed. The entrance to the away area is at the top of the stand, so you descend through the concourse at the back of the stand and then onto the rear of the terrace. On the concourse are separate areas for serving alcohol and food. Bitter, Lager and Cider are available and there are TV's around, showing SKY Sports. The bar also handily opens again at half time. If demand requires it then a block of seating in the Sir Stephen Roberts (West) Stand can also be allocated.

Generally the atmosphere inside the stadium is good, with a relative few visiting fans being able to generate some noise from the covered away stand. Unusually the Club have taken the decision not allocate as a matter of course, a seating area for away fans so only the terrace is available. However, if fans request to be seated, as they are unable to stand throughout the game, then seating will be provided in the Main Stand.

There is a small bar located within the Study Centre Facility behind the Jack Bentley Terrace, however this does not admit away fans. There is the Dugout bar, which also shows Sky Sports, which is located in the Whitehouse Hotel which is adjacent to the stadium. Otherwise the nearest pubs are the Cock Hotel and the Swan Hotel, which are around a five minute walk away from the stadium. Go around behind the Main Stand and you will see the hotel bar and then turn right along the main road and both pubs are located opposite one another at a crossroads. The Cock Hotel is a regular in the CAMRA Good Beer Guide and has eight hand pumps, one of which is normally given over to cider. The Swan Hotel opposite also features a carvery. Otherwise alcohol is served in the away end.

If you are arriving by train, then near Wellington Railway Station is a Wetherspoons pub called the William Withering, which is located on New Street.

Leave the M6 at Junction 10 and take the M54 towards Telford. Leave the M54 at Junction 6 and turn right at the roundabout above the slip road (SP A5223 Telford West/Whitchurch/Hospital). Go past Tescos on your left and then over two roundabouts. At the third roundabout, where there are Ford and Kia Garages on one corner, turn left. The entrance to the Club car park is a short way down this road on your right. It costs £3 per car, whilst disabled badge holders are admitted free.

At the top of the station approach turn left and then at the subway in front of you branch left along New Street. Cross over the road at the traffic lights and go up the road in front of you, which is the High Street. When you reach the mini roundabout bear left still going along High Street, which becomes Mill Bank. Continue along this road till you reach the Swan Hotel then turn left. The ground is down the road on the left next to The Telford Whitehouse Hotel. Thanks to Scot Rowland a visiting Tamworth supporter for supplying the directions.

Please note that cash is not accepted at the turnstiles. Tickets either have to be bought online or from the ticket office at the ground, which is located outside the East Terrace near to the Learning Centre Building. The only exception to this is that if the match is segregated, then away fans will be allowed to pay cash to enter.

Book Your Telford Hotel Accommodation And Help Support This Website

If you require hotel accommodation in Telford  then first try a hotel booking service provided by
Booking.com. They offer all types of accommodation to suit all tastes and pockets from; Budget Hotels, Traditional Bed & Breakfast establishments to Five Star Hotels and Serviced Apartments. Plus their booking system is straightforward and easy to use. Yes this site will earn a small commission if you book through them, but it will help towards the running costs of keeping this Guide going.

Special thanks to Owen Pavey for providing the photos of the Jack Bentley Terrace and David Hutchison Stand.