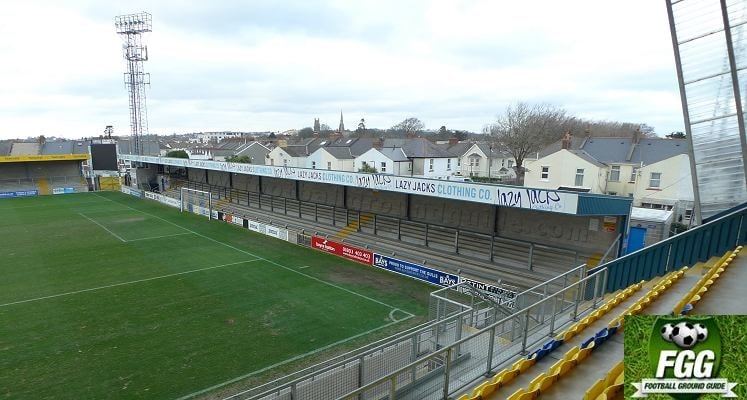 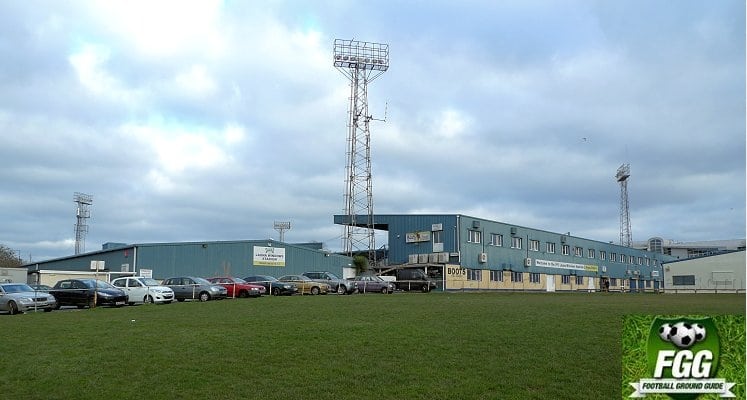 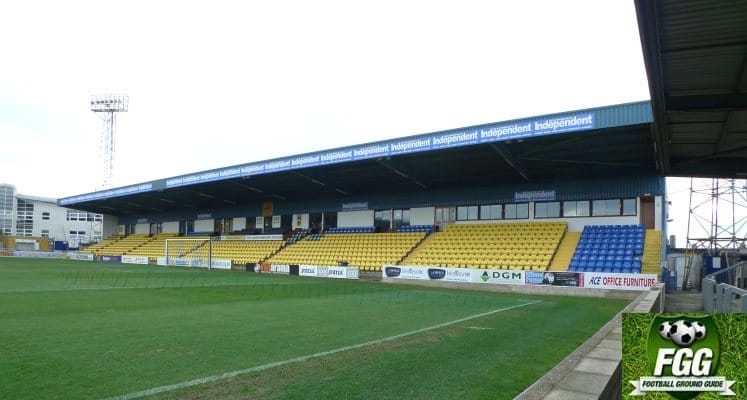 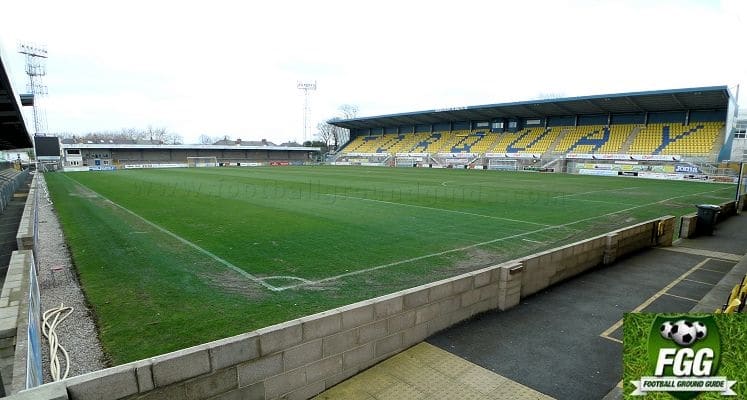 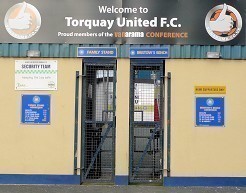 On one side is the Bristow's Bench Stand (named after a former Director of the Club). Opened in 2012 this modern, covered, all seated stand has a capacity of 1,750. It is a fairly simple looking affair, although it has windshields to either side situated below an elevated roof. The stand is raised above pitch level meaning that spectators have to climb a small staircase to enter it. Opposite is a newish, small covered terrace, called the Thatchers Popular Cider Terrace. It looks slightly odd, having a large television gantry perched on its roof.

At one end is the Family Stand, which is a neat, attractive, covered all-seater stand that has a capacity of 1,200. Differing from other clubs, the Directors Box is situated in this stand, rather than being on one side of the pitch. The other end is a small covered terrace, built in the year 2000 to replace a former open terrace and is normally used to house away fans. To one side of this stand is Police Control Box. Outside the ground behind the home end and next to the Club shop is a programme shop which is worth a look. In one corner of the ground in-between the away terrace and Popular side, is a large video screen. The ground is completed by a set of four traditional looking floodlight pylons.

The Club have announced that they are exploring with the local council, of the possibility of building a new stadium in the Barton area of Torquay, which is located about a mile north of Plainmoor. Talks are very much at the preliminary stages, but if successful then the Club could move to a new 6,000 capacity stadium.

Around 1,100 away supporters can be accommodated in the Riviera Rentals Away Terrace, at one end of the ground. In addition, up to 500 seats can also be made in the new Bristow's Bench Stand on one side of the stadium. Both of these areas are covered. The acoustics in the away terrace are particularly good, meaning that relatively few away supporters can still really make some noise from this area. The views from the Bristow's Bench Stand are excellent and you are that high up that you can see well over the Popular Terrace opposite and to the hills in the distance. The leg room is great with plenty of space between rows. However, do bear in mind that the stand is quite steep to walk up. Home and away fans in this stand are separated by some netting placed over the seats. The facilities are also generally good with a modern toilet block. The refreshments are served from a mobile catering unit, which alas does not offer and pies (although they are available in the home sections). Food on offer includes; Double Cheeseburgers (£4.50), Double Burgers (£4), Bacon Burgers (£4), Cheeseburgers (£3.50), Beefburgers (£3), Hot Dogs (£3) and Bacon Baps (£3). All in all a visit to Plainmoor is a good day out. 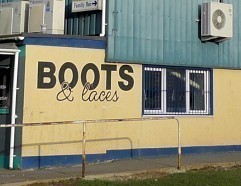 The supporters club 'Boots & Laces' behind the main stand allows away supporters in and I found it quite pleasant and friendly. Neil Le Milliere a visiting Exeter supporter adds; 'The George Inn on Babbacombe Road, was extremely welcoming, both before and after the game. The pub is around a ten-minute walk away from the ground'. Located handily around the corner in Princes Street is the Hanburys Fish & Chip shop which has on occasion won national awards. Further on at the bottom of Princes Street, you will find the Buccaneer Inn. Not only a good pub serving St Austell Ales but outside the front of the pub you can also enjoy some great views along the coast. (There is also plenty of street parking available in this area). Also on Babbacombe Road is the Dog & Duck which welcomes away fans and also shows matches broadcast on SKY television.

At the end of the M5 follow the A38 and then turn left onto the A380. Then at the traffic lights bear left onto the A3022 towards Torquay. On reaching a large retail park on your left (including a Currys PC World) turn left at the traffic lights towards Babbacombe/Plainmoor. Go straight across at the next roundabout. On reaching a T-Junction, turn left and then go right at the mini roundabout onto Westhill Road. Continue along this for 3/4s of a mile as it becomes Warbro Road. The ground is on the right. Plenty of street parking is available in the local area.

The Plainmoor ground is over two miles away from the main Torquay Railway Station and so a taxi (around £6-£7) may well be in order. Neil Le Milliere adds; 'Torre station (one stop before Torquay station but not all trains stop there) is closest to the ground. Walk up the hill opposite the station and its around a 20-25 minute walk.

If you have time on your hands then you can walk to the ground from Torquay station in around 40 minutes: On leaving the station turn left into Rathmore Road. Follow the road down crossing into Falkland Road. Proceed by way of Lucius Street and Tor Hill Road into Union Street. Take the St. Marychurch Road and climb the Hill towards Babbacombe then take the third turning on the right into Bronshill  Road. The floodlights of Plainmoor will be visible after a few minutes on the left. Thanks to Myles Munsey for providing the directions.

If you require hotel accommodation in Torquay then first try a hotel booking service provided by Booking.com. They offer all types of accommodation to suit all tastes and pockets from; Budget Hotels, Traditional Bed & Breakfast establishments to Five Star Hotels and Serviced Apartments. Plus their booking system is straightforward and easy to use. Just input the dates below that you wish to stay and then select from the map the hotel of interest to get more information. The map is centered to the football ground. However, you can drag the map around or click on +/- to reveal more hotels in the town centre or further afield.

Special thanks to Owen Pavey for providing the layout diagram of Plainmoor. 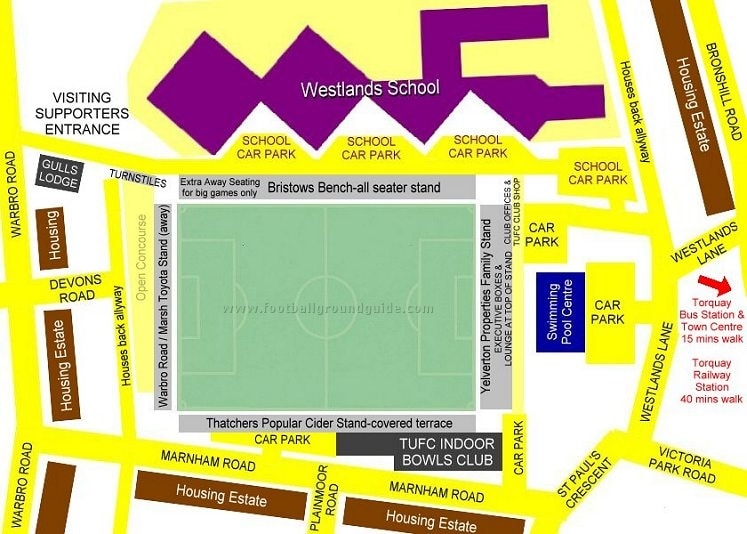